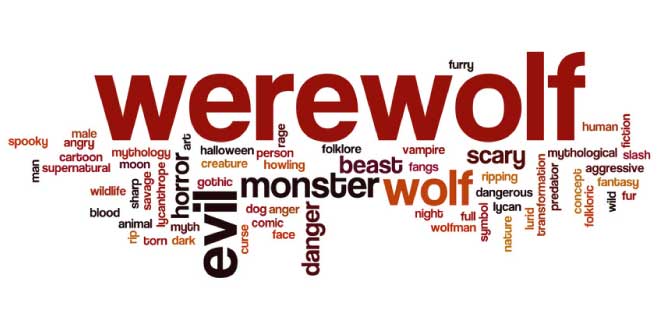 Yes, warewolf and no, I’m not drunk – yet. There just so happens to be more than one word (misspelled or not) conjuring up images of half-human monstrum masquerading as ordinary folks by day and transforming into wolves under the night’s moon.

Whether you conceptualize werewolves as bipedal humanoids or fancy them as completely transformed wolves, the origin and use of the word “werewolf” are a bit more complicated than you might have guessed. Let’s take a quick look at some of the other noteworthy names these cryptids go by.

A Drunk’s 60 Second Brief on The Entomology of “Werewolf.”

In Old English, “were” means man, so combining “were” and “wolf” together is a no brainer and probably the easiest factoid to remember.

Now it gets a little harder. Another frequently used word, lycanthrope, is the combination of the Greek terms “Lykos”, meaning wolf and “anthrōpos,” meaning human.

As you can see, all of these words have something in common, so you would probably be able to infer their meaning in any written texts. The same applies to most of the modern spellings and misspellings for these creatures, including “warewolf,” “wearwolf,” “warwolf,” “werewov,” “wereworlf,” “woriwof” and “werwuf.”

Interestingly, Scandinavians put their unique spin on the standard variations. The closest English equivalent to their word for werewolf is “evening wolf.” The term they use, “kveldulf,” doesn’t trace its roots back in the same way as every other werewolf word. Instead, it was inspired by a 9th-century berserker named Kveldulf Bjalfason.

As we’ve discussed before, the Greenland Inuit refer to their version of a werewolf as an Erqiglet or Adlet.

No matter which name you choose to use, a werewolf still has the same characteristics, and their bite would be just as painful. Isn’t it amazing how many cultures have words to describe a creature that modern science claims doesn’t exist?

Previous The Night Class, Part 14
Next Rewatching Dead: Season 6, February – Moving Up the Hierarchy of Needs