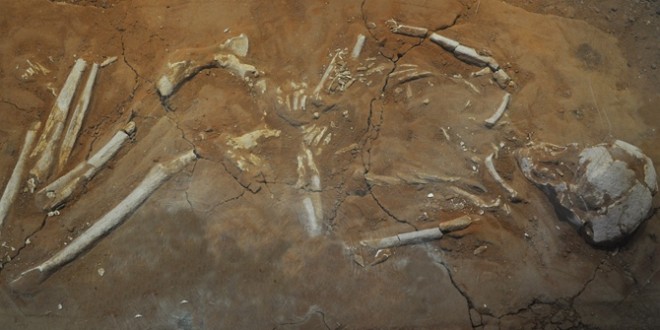 The remains of a grave at Passo Marinaro. Credit: Photograph by C.L. Sulosky Weaver, courtesy of the Regional Museum of Kamarina, Sicily.

Ancient Greeks Made Sure Their Dead Wouldn’t Rise As Zombies

Fascination with zombies is more than a modern phenomena marking the unavoidable apocalypse of mankind due to one (or more) self-induced calamities. The roots of zombie folklore and myths are clearly traceable from the Americas back to the early African settlements in the Carribean. On those islands, a unique culture that believed the dead can return from the grave took root and significantly influenced the grotesque concept of the living dead we’re familiar with today. But according to one archaeologist, these fun loving undead munchers aren’t unfamiliar to other ancient civilizations, and in particular, Ancient Greece was well aware of them.

Few would argue that modern day Greece has devolved into a zombie-like economy. Heck, even financial analysts are coining the phrase because it’s that bad. Therefore, it’s ironic that Greece and zombies are sharing the same headline but for different reasons other than their economic woes.

An Archaeologist at the University of Pittsburgh, Dr Carrie Sulosky Weaver, has postulated that the Greeks feared their dead would rise as zombies and actively took measures to ensure corpses stayed firmly in their graves. Dr Weaver believes she’s found forensic evidence proving zombies, or the fear of zombies, were very much a part of Greek life at a mass grave site containing the remains of upwards to three thousand people. Her proof? Two of those bodies showed clear evidence of being weighed down by large items.

But what has this to do with zombies? In Ancient Greece, large stones or fragments of large jars called amphoras were used to weigh down the dead for fear the corpses would rise at sundown. As they prowled the night, these reanimated corpses would search the streets for fresh victims. The Greeks attributed a person’s rise from the dead to events and actions related to their death, such as exacting retribution for wrongs committed against them during their life, including anyone involved in their death.

The burial site where the two bodies were discovered is located in the necropolis at Passo Marinaro, Sicily. Once a thriving Greek colony called Kamarina, the remains date back approximately two thousand years. While archaeologists have been examining the site since the 1980s, Dr Weaver is the first archaeologist to connect these odd burials to zombies.

The remains in the first grave Dr Weaver studied showed signs of teeth with arrested growth, a sign of acute malnutrition or illness. The head and feet had been covered with large amphora fragments to prevent it from later rising, presumably.

The second remains were of a child between the ages of eight and thirteen. The body itself was unremarkable with no signs of illness or disease, but five large stones had been placed down, covering the entire body.

While we may never know why these two individuals were buried in such a unique way, it’s obvious the circumstances of their deaths (or lives) prompted extra efforts to ensure the safety of the community. When dealing with zombies, better to be safe than sorry and apparently Ancient Greece took them a bit more seriously than we do today.

Previous The Hoping Dead: Rewatching The Walking Dead Season 2.0
Next The Slide Rock Bolter of Colorado