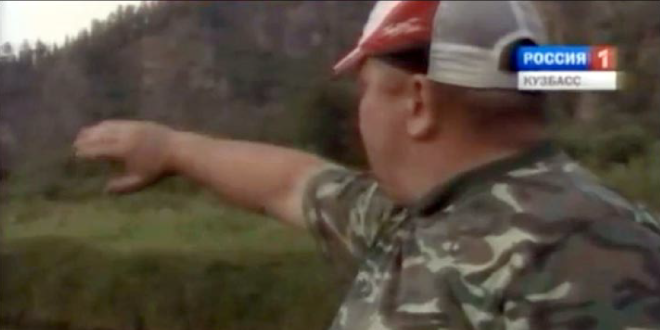 Fisherman, Vitaly Vershinin, shows the location he observed the Yeti from his boat on the Mras-Su River.

Bigfoot Sightings in Siberia – The Yeti Is Alive and Well

A spate of recent Bigfoot sightings within the last few years in the Kemerovo region of Russia highlights the apparently thriving Yeti community living in the remote parts of the country.  Experts believe there are around 30 of the creatures living across this remote area of Siberia.

The first report came from the fishing village of Myski, in August 2012, where a fisherman, Vitaly Vershinin, reported observing two distant figures from his boat on the Mras-Su River. At first, Vershinin mistook the figures as bears but as he moved closer, he believed they were people.  He called out to them to see if they needed help and suddenly realized they weren’t wearing clothes – they were in fact covered in fur!  The creatures, startled by the fisherman, walked on two legs and made their way through the bushes until they vanished.

This was followed with a report a few days later from the same Mras-Su River.  Similar to Vershinin’s account, unnamed fishermen saw some tall animals from their boat which looked like people.  They admitted their binoculars were broken so they couldn’t see them clearly but they waved at the figures and received no response.  The creatures then turned and returned to the forest, again walking on two legs.  It was at this point they realized the dark clothing was actually dark fur and knew they were not people.

A third report came the following month, in September 2012, from an unnamed forestry inspector who encountered a creature in Shorsky National Park.  Speaking on behalf of the inspector, local government official Sergei Adlyakov stated the creature looked like a bear and vanished into the bushes while walking upright.

Consistent reports of the Yetis confirm the creatures have an approximate height of seven feet with bodies covered in either red or black fur. Many reports also mention the creatures have natural climbing abilities and while they’ve been blamed for the theft of livestock in the area, there have been no known attacks on humans.

Yeti expert, Igor Burtsev, head of the International Centre of Hominology, agreed the sightings were significant.  He also noted these sightings were coming north of the normal area for Yeti reports.  Could this mean that the population is growing and moving into new territory or perhaps being moved from its traditional territory by human incursion?

Earlier investigations into what is thought to be traditional Yeti territory had uncovered trees twisted to form an arch in an unnatural manner. The arch pattern also matches trees found in North America at sights associated with Bigfoot sightings and are thought to be related to territorial markings by the creatures.  These sightings came a year after the Russians had started a research institute to study the Yeti after 15 witnesses in a 12 month period came forward in Siberia to log sightings.

Dr Burtsev is convinced the Yetis are a remnant population of the extinct Neanderthal man who has survived in remote areas.  This is a theory that has also been connected with Bigfoot, Sasquatch and other hominid type cryptids around the world.  Whether the Russian studies can collect data to confirm this one way or the other will be eager anticipated in the coming years.

Previous New Mothman Sightings In Colorado
Next The Werewolf Killer