Are Cryptids Kidnappers? Evidence of Sasquatch Abductions Points to Yes

Today, people commonly conceptualize monsters as characters from the most recent horror movie and the only thing they know about the natural existence of these creatures is based on what’s been characterized in pop culture literature. To be fair, it is true the ethology of these creatures is largely unverified beyond unexplained deaths, missing persons and half-eaten live stock but a pervasive bias to continually view them through a Hollywood lens has created a dangerous misconception of their behaviors in the western culture; a blind spot. These misconceptions often mislead people into believing a false sense of security when in fact there is none.

As an example, one basic aspect fundamental to the continued existence of all creatures is reproduction. For some, the word reproduction used along side werewolf or vampire would be interchangeable with the word infection, implying propagation occurs primarily due to a disease transmitted through a bite or scratch. In reality, many cryptids, including the aforementioned, rely primarily on breeding with the opposite sex to reproduce and maintain their societies. In situations where a suitable partner of the same species is unavailable, cryptids have been known to abduct humans.

One such legendary creature notorious for abducting humans is the Sasquatch and American Indian folklore is rich with tales of female abductions by the beasts for breeding. These legends are arguably supported by unexplained bizarre genetic abnormalities documented by anthropologists in some American Indians.

As a lesson to always keep your blind spot in check, the following terrifying report comes from a blogger claiming to have witnessed one of these abductions:

We all looked to see what the urgency was it took our attention and breath away. It was something far taller and much larger than a person, it had fur and was dark in appearance, the arms fell much longer than anyone normally. It was pulling something that we noticed looked like a person up the snowy embankment above the road across the opposite side from the rest stop. Our jaws dropped and were frightened by what we seen. it had to have been the person that left the car sitting idling. It gave evryoen chills and the trucker told us he was going to report the car abandoned and person as missing. The creature we seen had no clothing on and what to appear as fur top to bottom. It was watching us watch him as he continued to pull what loooked like a person up the hill. Right away we jumped into the car to get away from there before anything else occurred, the trucker also left immedialty fast as we could go. While we drove away we had to pass along the embankment in the direction where we spotted what we believed was a Sasquatch. I looked out the back window sitting beside my newborn and niece scared outa my wits watching this creature running on top of the treed hill to our direction through the snow. We drove as fast as possible to get out of there without making any stops, my brother was so afraid he was in tears…

Previous The Vampires of Woodstock
Next Are Ghouls Behind Two Hundred Missing Bodies? 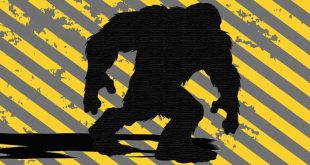 Authorities in Clarke County, Alabama, are searching for the man who claims a bigfoot is …