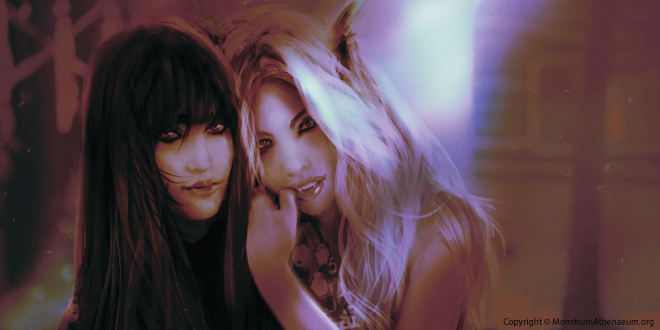 I know I haven’t been keeping you up to date lately; I know that.  But so much has been going on that I don’t even know where to begin or what’s going on, exactly, or more importantly, how I feel about it.  It seems everything in my life just confuses the hell out of me always!

Oh, all right. Here’s the thing.  Sammy’s back.

She hasn’t changed – long silky, black hair ending in an arrow point leading to her perfect, upside down, heart shaped ass. Skin as pale as the full moon with those tender lips naturally the shade of fresh blood … [sigh]

I know.  I know.  That chapter of my life is long over.  I thought I lost Sammy forever, it was all so quick and mysterious. She came into my life suddenly and left the same way.  When I got done crying & whimpering, I chalked the whole thing up to this: she does weird and mysterious things because they are just freaking weird.  And mysterious, and, oh my god, so damned beautiful and…well, you know the rest.

I don’t know why she left me the way she did. Sammy and I got along , maybe a little too well.  Something clicked when we met and I’d be lying if I didn’t say it’s still sprung. Now I’m getting pissed again because she could have told me why she left!

I’m so confused because, even though I’m still mad as hell, Sammy’s the only one I’ve ever been interested in, intimately, other than Brendan. I must admit, I did share way more about myself with her than I’ve shared with Brendan but that doesn’t mean anything at all. Does it?  I love Brendan… I do.  It’s just that I go soft in the head whenever I’m near Sammy and I burn just thinking about her. Sammy really hurt me when she left, maybe I’m just afraid Brendan will hurt me too.

I guess that’s what I like so much about Brendan, he’s very much down to hearth and human. Sammy was always larger than life and, at times, unapproachable. With her, I felt like I had no control but with Brendan, I feel comfortable and I trust him way more. Brendan’s all about respecting my space where Sammy was all over it, and me, at least when she wanted to be.

I guess things never change. Since Sammy’s been back for nearly a week now, I can’t move without bumping into her.  When Brendan and I go to lunch at the café, she’s there.  I see her in the library when I study for exams.  I see her all the time!  She came back out of nowhere and is suddenly in my life – everywhere;  screwing up my peaceful, little world.

Makes me wonder, though, is she stalking me or Brendan? I don’t think Brendan has noticed her, if it’s one thing Sammy was always good at, it was hunting. I guess that’s positive though because if Sammy wanted Brendan to notice her, he would have, and that would have been bad, very bad.

I never told Brendan about Sammy – at least not the truth. How could I? I still haven’t told him the truth about me. That was one thing I never had to worry about with Sammy. She loved me the way I was and, I swear, was turned on when I was bad ass.

Not that there’s any way I could have but I’ve never told Sammy about Brendan, just you. Maybe that’s why she hasn’t approached me, she’s checking him out. I just wish I knew why because it’s not like her to not be direct. I’ve only seen her act this way twice. The first time was when we met, she pretended to be adorably shy and I would just catch glimpses of her every where. The second time was…actually I better not write that down but it was pretty awful and messy.

Always thoughtful in your embrace, Shelly.

Dear Sarah, I know I haven't been keeping you up to date lately; I know that.  But so much has been going on that I don't even know where to begin or what's going on, exactly, or more importantly, how I feel about it.  It seems everything in my life just confuses the hell out of me lately always! Oh, all right. Here’s the thing.  Sammy’s back. She hasn’t changed - long silky, black hair ending in an arrow point leading to her perfect, upside down, heart shaped ass. Skin as pale as the full moon with those tender lips…
Dear Sarah (Diary Entry No. 6)
Dear Sarah (Diary Entry No. 6)
The Librarian