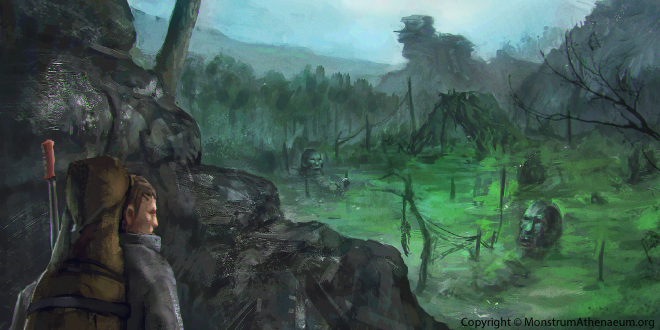 He had no problems finding Bigfoot and had observed the creatures nine different times.

An Ohio man who claims to have had numerous encounters with a Bigfoot cryptid in Scioto County, Ohio, also said he has seen the camp the creatures call home.  In addition, he discovered what he believed to be a burial ground where the creatures buried their dead in much the same way we do.

The man, Dallas Gilbert, star of Not Your Typical Bigfoot Movie, refused to disclose the location of the site for fear hunters may kill the creatures but did reveal he had no problems finding Bigfoot and had observed the creatures nine different times.  His encounters were based in and around the Shawnee Forest and included being lifted off the ground during one encounter.

Gilbert has become adept at understanding the markings left by the elusive cryptids and claims to be able to track them.  The camp he followed the creature to had a canopy and a bow made from trees to sleep under as well as what appeared to be a burial stone.  The stone had been crudely shaped with the outline of a head, eyes and teeth.

Fellow enthusiast and friend Wayne Burton backed Gilbert’s claims.  He first saw Bigfoot in 1978 and has seen the creature on a number of occasions since.  Perhaps not as docile as some believe, Burton admitted to being frightened during an encounter when he was nearly attacked by one of the creatures that charged to within 20 feet of him; growling.

The Shawnee State Forest is situated near the great area of wilderness known as the Wayne National Forest with the Ohio River to the south and the foothills of the Appalachian Mountains nearby.  The Wayne forest spans over 210,000 acres.

Aside from Gilbert’s encounters, there have been scores of reports from this area dating back to 1869 when a man and his daughter saw a frightening wild man near Gallipolis, Ohio.

A campground in the Wayne National Forest had been closed due to a rash of Bigfoot sightings over a month-long period.  A leaked memo to the media from the Ohio Division of Wildlife Department of Natural Resources directed personnel to keep the matter ‘low-key’ to avoid upsetting visitors. Ohio researcher, Lynda Wygel, attempted to conduct an investigation into the closure but was unable to confirm the closure happened.  However, evidence was found that the camp ground, though unnamed, was listed as under construction rather than closed.  Not necessarily the Bigfoot evidence hoped for but it does leave open the possibility the event had occurred.

Given the enormous forest area available to the creature across two National Parks; it’s entirely understandable why sightings would be rare. Armed with an elusive cunning which would have Houdini jealous, Bigfoot would have little difficulty hunting, living, and even breeding in this territory.

Previous Journal Entry – May 8th
Next Are Vampires At The Heart of A Monstrous CDC Conspiracy?