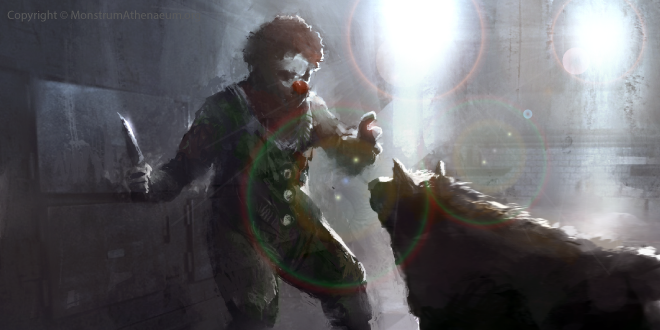 The wolf lunged at the clown and he struck out with a knife to defend himself, stabbing the wolf in the leg. It yelped in pain and the clown saw his chance.

James was twelve years old and just starting to get into girls. He really liked Anna Johnson even though she thought he was a little creep. He didn’t know why but he was always trying to impress her, just the same. Halloween was around the corner and James wanted to have the best costume and do something really awesome with Ralph and Keith, his best friends. James didn’t know how but he did know this Halloween was going to be different, it had to be! He felt too old to go door knocking for candy and carnivals and hayrides were getting lame. Maybe if he had a killer costume and thought of something really cool to do, Anna Johnson and her friends might go with them. During class (probably when he should have been thinking about math), James thought really hard and came up with a plan – Scream World!

Scream World was the scariest haunted house in the world. When James was nine, his older sister had taken him there and it was so scary he had night terrors for months. In fact, it was so scary; the haunted house had special ‘emergency exits’ where you could run out into the parking lot if things got too scary for you to handle. James used an emergency exit that night and swore he’d never go back, until now, he had to impress Anna Johnson.

Ralph and Keith listened to James as he laid out his plan. It was awesome and they were in – the plan was set! Choking down the vomit that kept crawling up the back of his throat, James eventually worked up enough nerve to ask Anna Johnson to go with him and his friends to Scream World. She rolled her eyes and James thought it was all over; he’d be lucky if the next words out of her mouth were just “No!” Instead, Anna Johnson said “Yes” but under one condition; her friends could meet him down there, he went when it was dark and he paid her way in. Score! He thought to himself.

James was floating on a cloud. He was going to dress up like a werewolf, Ralph was dressing up like Spiderman and Keith was going to be the guy from Scream. Epic plan, he thought.

Halloween day came painfully slow and when it finally did, James couldn’t stay still in his seat. The excitement to be going to Scream World and, more importantly, meeting Anna Johnson there was more than he could endure. Mrs. Abernathy, his history teacher, threatened to send him to detention if he didn’t stay still. James managed to make it through the day without detention, got on his bus and headed home.

James and the guys put on their costumes and hung out a little while at Keith’s house until it was time to go. Keith’s dad was pretty cool and drove them to the Scream World parking lot and dropped them off. James’s mom had given him enough money for his and Anna Johnson’s admission for promising to finish all his house chores. When he got near the entrance to pay admission, he noticed her friends, Becky and Sarah, were where they agreed to meet, but Anna Johnson wasn’t. James asked them where she was. “Anna is sick,” Becky said, and she giggled to Sarah, elbowing her on the side like they understood a private joke. James was heartbroken, but maybe she really is sick, he thought. Keith and Ralph paid the girls’ way in and they went inside.

As they entered, James noticed it was still pretty scary and some parts were cooler then he remembered. The vertigo bridge made him feel noxious, like he might pass out if he didn’t hurry. The character costumes were pretty neat and realistic-looking. James just noticed his friends had gotten ahead of him, clinging to the girls, when several crazy characters jumped from the shadows and scared the crap out of him. None of them touched him, though, it wasn’t allowed. James rounded the corner and his friends were gone but he didn’t care. He stopped to look at a hideous, deformed creature in a lab jar–cool, he thought. In an instant, someone grabbed him from behind and put something over his nose and mouth. The pungent chemical smell saturating the cloth washed over James’s face and he started to feel dizzy, his legs buckled. Unable to resist or call out for help, James felt his body lift off the floor as someone carried him toward one of the emergency exits.

All of a sudden a growl bellowed from the darkness and James’s body shuddered from an unseen, hard impact. Thud! James and the person carrying him both fell to the ground. Unable to sit up, James peered through the smoke and darkness and saw what looked like a large animal squaring off against a shadowy figure dressed up like a clown. That scared James even more because he had snuck into his sister’s room a few weeks ago and watched a story about John Wayne Gacy and how he dressed up like a clown. James hadn’t slept right for days after watching that story.

Realizing what was happening; James felt a burst of adrenaline course through his body and was able to lift his head to get a better look. The animal cornering the man against the wall…it was a wolf!

The wolf lunged at the clown and he struck out with a knife to defend himself, stabbing the wolf in the leg. It yelped in pain and the clown saw his chance. He high-tailed it out the emergency exit toward the dark, back parking lot where his pickup was parked. The animal gave pursuit and bolted after the man just before the door swung closed. Shortly after the door latched shut, James blacked out.

James woke up in the hospital with his mom and dad at his bed side. His dad told him that a child molester dressed as a clown had tried to abduct him and someone had killed him in the parking lot, when he ran outside. Apparently whoever scared the man away from James followed him outside and in the altercation, killed him. James wondered if he imagined the whole thing he saw earlier with the wolf.

A few days later James returned to school. He hadn’t spoken to Anna Johnson since the incident but he shared a history class with her and looked forward to seeing her again. He was going to ask her if she felt better and secretly hate on her if she wasn’t really sick and just blew him off. James blamed Anna Johnson a little for what happened. Had she been there he wouldn’t have been alone.

James entered the doorway to class and saw Anna Johnson sitting there. She looked up at him and he knew, before he even saw the bandage running all the way up her arm, what had happened.

When class was over James went over to Anna Johnson, she looked up at him and said, “What do you want little twerp?” Sarah and Becky giggled as they elbowed each other, enjoying what they thought was some geeky kid hitting on the pretty girl with no chance in the world of getting with her. James said, “I just wanted to tell you thanks, Anna.” Anna Johnson didn’t say a word but let out a little, shy smile – it was the first time James had ever seen her look nervous. He never talked to Anna Johnson again and she moved away soon afterwards.

James was twelve years old and just starting to get into girls. He really liked Anna Johnson even though she thought he was a little creep. He didn’t know why but he was always trying to impress her, just the same. Halloween was around the corner and James wanted to have the best costume and do something really awesome with Ralph and Keith, his best friends. James didn’t know how but he did know this Halloween was going to be different, it had to be! He felt too old to go door knocking for candy and carnivals and hayrides were…
The Halloween Wolf
The Halloween Wolf
The Librarian