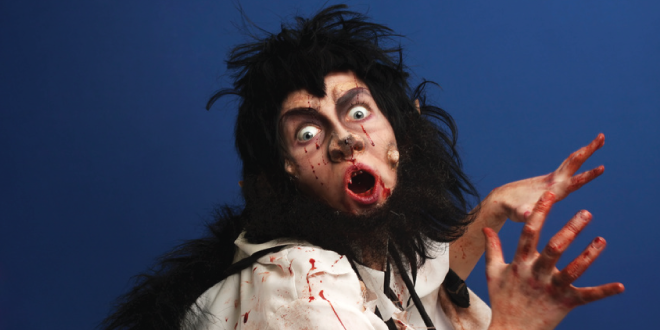 Hoaxes: The Real Life Origins behind the Argentine Werewolf Boy, the Cottingley Fairies and More!

I don’t need to tell you hoaxes make it difficult to separate the wheat from the chaff when it comes to determining which cryptid stories are legit and which ones are troll bait. However, sometimes you can find a pearl when the origin of a hoax turns out to be just as fascinating as the real thing. The trick lies in differentiating between those tall tales that appear to be based on something truly unusual and the ones purposefully fabricated. Granted there’s no foolproof method for making a quick determination (especially with hoaxes that have been around for a long time) but at least we can verify the origins of some of the more popular myths.

Case in Point: Is There Any Truth to the Argentine Werewolf Boy Story?

In December 2014, media outlets around the world began covering a story about a supposed “werewolf boy” who became the godson of the President of Argentina. According to these reports, it was superstition the seventh son of any Argentine family is cursed to turn into a werewolf after he turns 13. However, for some bizarre reason, the boy would be spared this fate and the curse broken  if he was symbolically adopted by the nation’s president.

Coming from someone whose seen more than his fair share of spoofs and mockumentaries, this story sounded suspicious from the get go. Those suspicions were confirmed after the official statement from the Argentine government claimed this symbolic gesture never had anything to do with werewolves. Instead, we’re now told the highly publicized adoption was simply a tradition for the president to extend godson or goddaughter status to the seventh born child of every Argentine family. Apparently it’s quite an honor for the family who attends a ceremony with the president while the lucky child receives a full scholarship and a gold medal to boot (werewolf boy or not)!

So how did this practice become mixed with tales of werewolf curses? Quite simply, according to historians, the faux story was the folding together of an Argentine practice with old world folklore from early Eastern European migrants. Similar to the Argentine president adopting a seventh son, early migrants to Argentina believed the seventh son of each family line would turn into a monster after becoming a man at the age of 13 (adulthood at the time).

So where’s the pearl in this story? How about the probability this hoax may not have actually been a hoax!? While not implying the Argentine president believes in werewolves (although she should) there’s evidence to suggest the practice may have originated from the superstition. There are many records of folklore in Latin America with similar story lines. For example, an old Guarani legend tells the tale of Luison, the seventh son of the evil spirit Tau, who could take the form of an animal and fed on corpses.

Was there a real life inspiration behind the legend of Luison? If so, was he a werewolf or some other shapeshifter? We’ll likely never know the answer to these questions but it stands to reason this old legend may have played a part in the Argentine government’s decision to start symbolically adopting certain children. After all, even if the first president who participated in this practice didn’t belief the myth, the symbolism would have been a powerful and merciful gesture to the people. Either way, it’s no surprise the government denies the werewolf legend more than a century after the first child was given the title of the president’s godson.

Some Hoaxes Start Out Innocent: The Real Story behind the Cottingley Fairies

In 1917, two photographs that seemed to provide evidence for the existence of fairies were taken by two young girls named Elsie Wright and Frances Griffiths. These girls, both cousins, managed to fool many photography experts and a large portion of the population including Sir Arthur Conan Doyle. A good thing going for them, the cousins staged three more faux fairy photographs which they adamantly denied as fakes until coming clean in the early 1980’s. Even though early trickery with photographic equipment has been well-documented, the most interesting part of this story is the fact two girls, without any special training or skills, were able to pull off such a convincing hoax.

According to their confession, the first four photographs were created using cardboard cutouts of fairies from children’s books. However, Frances, the youngest of the two, still refused to admit that the fifth photo was a fake. Experts who’ve examined the fifth photograph offered the theory the image may have been the result of double exposure which explains why Frances believed she had actually succeeded in capturing real fairies on film.

The most compelling question about a hoax like this is why would two young girls conspire together to trick people? Elsie told an interviewer in 1985 that they were simply having some fun and never meant to create a hoax. She stated it was shocking someone as notable as Sir Arthur Conan Doyle could be taken in by their innocent gag but the two girls were too embarrassed to try to correct his error.

Perhaps the most notable aspect of this particular hoax is the result it had on popular culture; inspiring countless other photographic scams.

Bigfoot Hoaxes: Complicating the Search for the Truth

There’s been a ton of compelling evidence submitted over the last century strongly suggesting our furry friend, Bigfoot, is indeed real. Unfortunately, there’s been just as many, if not more, hoaxes involving attention seekers in monkey suits which have become fodder for skeptics. For example, a fisherman recently sent a photo to the Huffington Post this January supposedly capturing the cryptid taking a bath but this image was quickly determined to be a fake.  Situations like this serve no purpose other than to show disrespect for folks who’ve genuinely had an encounter with a cryptid. This particular photograph is especially insulting because the fisherman in question didn’t even try very hard to create a realistic looking scene yet that didn’t stop many in the field from heralding this as a major breakthrough in the search for Bigfoot. It’s fair to say 2015 did not start off with the hard evidence many Bigfoot enthusiasts have been looking for.

Another blow to the cryptid community was dealt by alleged huckster Rick Dyer. In 2008, Dyer and a friend told the world they had found the carcass of a Sasquatch and would be submitting the body for a scientific analysis. This hoax lasted for approximately two months before Dyer came clean, angering a lot of people since he cashed in by collecting money for interviews during this time.

Even though Dyer was quoted in 2008 as saying that “Bigfoot doesn’t exist,” he apparently could not resist the urge to return to the same moneymaking idea in 2012. Dyer again claimed to have a real Sasquatch body and made plans to exhibit it around the world. This might have been a lucrative venture but Dyer never released data from the scientific analysis he claimed to have performed on the body and the bottom fell out of this scam before he was able to sell tickets.  In 2014, Dyer admitted to lying yet again but it’s amazing some folks were willing to listen to him the second time around.

Hoaxes created by children merely having some fun are easy to explain and typically do little harm to the credibility of the overall community but adults intentionally fabricating evidence for profit and fame can have devastating effects.

Slap a Bow on It and Call it a Monster: Was the Montauk Monster a Hoax?

In 2008, an animal carcass was reportedly found after it had washed up on the shore of a beach in Montauk, New York. The odd looking body caused the media and cryptozoologists to pay attention and spawned many theories in the months that followed the discovery. It’s now widely believed the Montauk Monster was actually a raccoon or a dog severely decomposed after floating in the water but (conspiracy time!) the body itself disappeared before it could be submitted for a scientific analysis.

Due to the lack of physical evidence, some people have speculated the photo was either faked or the so-called body had actually been constructed out of latex. Interestingly, two similar looking corpses were later found in Northville, New York, and in New York City’s East River. The creature in NYC was dubbed the East River Monster, but the local Parks Department ended up declaring that it was actually a pig carcass.

There is absolutely no way to know if all three of the similar looking corpses were pigs or something else and, without the first carcass, it’s impossible to determine if the photograph from Montauk was a purposeful prank or actual evidence something unusual truly did wash up on the shore.

Nessie: We’re So Distrusting We Call the Admission of a Hoax a Hoax!

The Loch Ness Monster has reportedly been spotted for approximately 100 years, but only one person was ever able to take a photograph of the popular creature. Unfortunately, Christian Spurling admitted 60 years later the object captured in the image by Robert Wilson in 1934 was actually a fake prop constructed by his father-in-law, Marmaduke Wetherall. This would seem to be the end of the story, but there are still some inconsistencies leading some to wonder if the confession itself was a hoax.

Per Spurling’s statement, Wetherall created the hoax out of a toy submarine and a fake monster head. This seems reasonable enough, but there is one major flaw in this story: the type of fake head needed to create the appearance of Nessie was not actually available for sale to the general public until after this point in history. While it’s possible Wetherall had access to a movie prop or even made the head himself, it’s just as likely Spurling pulled a reverse prank by making an inaccurate claim about the photograph.

Is Nessie really a hoax? Without a confession from Wetherall or the discovery of the materials supposedly used to create the fake monster, it will be impossible to ever know for certain what truly happened on that day in 1934.

Have You Had a Real Encounter? Then Share it!

All of these hoaxes and pranks clearly warrant a certain measure of skepticism and that’s actually a good thing! After all, as much as we would love to believe every myth is real, we have to admit to ourselves that some stories have been completely fabricated. With that said, individuals who have proof of a cryptid encounter are encouraged to share it with the community because keeping the information to yourself ultimately does more harm than perpetrating a hoax as it robs the community of the opportunity to learn the truth.

If you have had an experience with a cryptid or anything supernatural, you’re invited to share it with us by leaving a comment below or sending us an email.