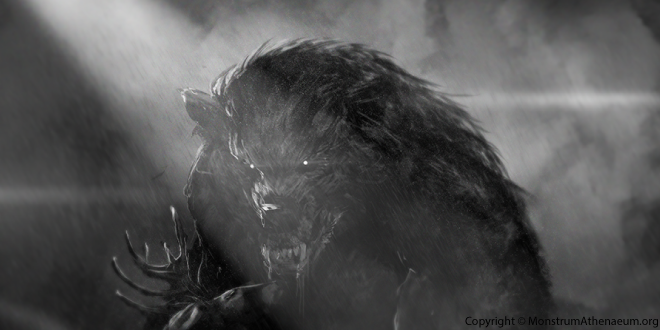 “It [The Beast of Holy Hill] was reaching into the truck and when I pulled away, the deer it grabbed onto and my ATV ramp that must have been tangled into the legs both came off the truck.” – Steve Krueger

Interview: Did Steve Krueger Survive An Attack From The Bearwolf of Holy Hill?

Regular visitors to Monstrum Athenaeum are probably familiar with the Beast of Bray Road, but it has become apparent that not all sightings near Bray Road, outside Elkhorn Wisconsin, are connected to the same cryptid. For example, we recently had the opportunity to ask one of the reported witnesses of the Bray Road creature a few questions, and one of the first things he did was shed some doubt on the accuracy of the encounter reported by news outlets.

According to many media reports, Steve Krueger encountered the Beast of Bray Road one fateful night on November 9, 2006, but Krueger was adamant about setting the record straight. Although he cannot say for certain which cryptid he saw, Krueger was emphatic that he never actually used the phrase “Beast of Bray Road” when discussing his experience. It seems journalists simply attached this name to his story. There are also several other discrepancies between Krueger’s actual encounter and the details published by a wide variety of websites and news affiliates.

We quickly realized, while interviewing Krueger, that the description of the creature he saw is similar to stories published about another cryptid known as the Beast of Holy Hill. We also found that there’s another, more popularized name associated with the same animal: the Bearwolf of Holy Hill. There’s no way to say for certain if these two creatures are the same thing or if they are what Krueger saw, but the true story of his encounter is definitely fascinating.

What is the Bearwolf of Holy Hill?

Before we delve into Krueger’s story, it makes sense to provide some basic details about the Bearwolf of Holy Hill. Author Linda Godfrey devoted an entire section to this cryptid in her book entitled “The Michigan Dogman,” and she believes that the Bearwolf is what Krueger saw. Godfrey theorized that perhaps the Bearwolf could be a Timberwolf that has somehow evolved in a very unusual way. Fortunately, Krueger is not the only eyewitness of this particular beast.

Krueger reported his encounter to authorities immediately and the story made the local headlines. The very next day after Krueger’s encounter, a local businessman, named Mike Lane, went searching for any evidence of the creature he’d just heard about on TV. Although local reporters made it sound like Krueger had seen a cryptid resembling Bigfoot (which wasn’t what he said), Lane found evidence suggesting that the mysterious creature was anything but Bigfoot. Instead, Lane found large prints that appeared canine in nature. Itself, dog or wolf tracks would not have been very interesting but there was one highly unusual feature about these prints: they had been made by something bipedal.

Another sighting of the Bearwolf occurred in 2007 and this eyewitness indicated the creature weighed at least 300 pounds, describing it as a combination of a bear and wolf. If true, this encounter further validates Godfrey’s theory, and further confirms Krueger’s belief that the creature he saw was not the Beast of Bray Road.

The night of November 9, 2006, Krueger was working as a contractor for the Wisconsin DNR in 2006, and it was his job to pick up deer carcasses with his truck across six counties: Washington, N. Fond du Lac, Brown, Waupaca, Ozaukee and Manitowoc. The routes, or runs, he travelled alternated so that each county was only included every other day. It was during a night when Krueger visited Washington, Ozaukee and N. Fond du Lac that he had his unexpected experience. According to Krueger, “the incident happened well North [of Bray Road] in Washington County on Hill Road,” and this is one of the reasons he does not believe he saw the Beast of Bray Road.

When we asked him for the real story of what happened so he could set the record straight, Krueger replied “The truck did shake. [The] first time was a light shake. The second was more vigorously which is when I looked into the rear view mirror. The creature never climbed into the back of the truck. It was reaching into the truck and when I pulled away, the deer it grabbed onto and my ATV ramp, that must have been tangled into the legs, both came off the truck.”  Krueger elaborated that he did not check his rear view mirror after the first time that his truck shook because, “I just thought it was a strong wind gust at first.”

According to Krueger, this particular creature is “dark in color.” Unfortunately, he cannot pin down a more specific color because “the only lighting was the [truck’s] beacon light and the [truck’s] small bed light. It was too dark outside to distinguish a color besides a dark color.” Krueger was able to state that the creature “had big pointed ears on the top of its head, and a bigger snout than what a bear has.” Steve Krueger also gave this description about the creature’s head and face to Madison, Wisconsin news affiliate NBC15 WMTV in their Special Assignment: Wisconsin Werewolf. When we asked for clarification on the snout comment, Krueger said “it was more pronounced than a snout on a bear. It was longer.”

After Krueger saw the unknown creature, he made an aggressive animal report at the local sheriff’s department. Krueger said that “the two at the station [who took the report] kind of chuckled, but they took it seriously and sent two squads out.” The story becomes even more interesting after this point: “I was contacted by both DNR wardens and Sheriff Deputies off the record, and they gave me more information that confirmed they think it was real.”

Krueger also returned to the area of the sighting, attempting to find the ramp that was pulled out of his truck. When we asked him if he felt like his life was in danger while doing this, he responded “I was damn nervous. [I] don’t know if I would say I felt my life was in danger.”

As mentioned earlier, Krueger previously opened up to Linda Godfrey about his experience and she appears to have been the only person who reflected his experience accurately in her book. In his own attempt to set the record straight, Krueger spoke with those local television stations that aired the incorrect information about his encounter and requested retractions. Although Krueger indicated to us that he would not have reported the incident if he was able to do everything over again, he does feel the overall experience did not have a negative impact on his job with the DNR or on his personal life.

Krueger is currently the publisher of an outdoor magazine named “Outer Boundary,” and a local historian. The magazine “deals with the fringe aspects of the outdoor industry and addresses illegal and inappropriate behavior within. “ This makes perfect sense for an individual who describes his personal interests as “fishing, camping and pretty much everything to do with the outdoors.”

Almost 10 years after the encounter on Hill Road, Krueger still isn’t sure what he actually saw. He is certain, though, that it was “probably an uncatalogued animal,” but he “has no clue” what the species may be. While Krueger did believe in ghosts before the encounter, he isn’t willing to label the unidentified beast as supernatural or paranormal.

We wish to thank Steve Krueger for granting us an interview, and for his commitment to setting the story straight!

Holly Chavez is a multidisciplinary writer and journalist who writes about a variety of subjects. However, her first love is writing about horror, and she also jumps for the chance any time there is news to report about strange and supernatural events. She was warped at an early age by a stash of Warren comic books that contained monstrous stories about werewolves, vampires and zombies.

Previous Lycans in Staffordshire: The Cannock Chase Werewolf
Next The Rougarou: I Like My Werewolves Cajun Style