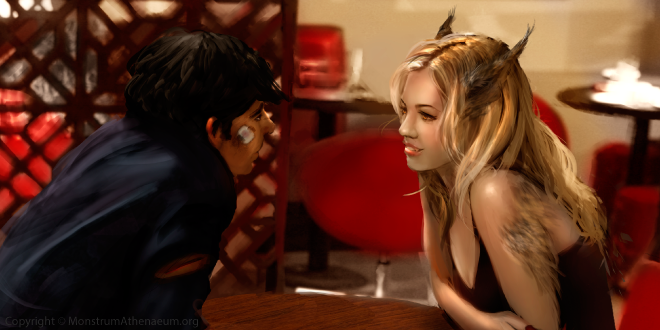 Ok, I don’t even know what to say about this past week. I may sound like I’m rambling( or perhaps even sobbing) as I write this, so bear with me…

I’ve been seeing Shelly for quite a while now, almost a whole year. I’ve always suspected her of being different, but that’s part of why I like her. She’s mysterious. So what if she’s got some quirky issues and wants to keep them private? I’ve known this for a while now, and I never even thought about running away from our relationship. Although, I admit, I’ve been worried she would run away from me.

I struggled with the idea of telling her I knew something was going on but, in the end, I decided it didn’t really matter if she wasn’t ready to tell me as long as she still wanted to be with me. And that brings us to now.

This new girl, whose name is Samantha (or Sammy, as Shelly calls her), used to be Shelly’s girlfriend. Ok, I’m pretty open but it shocked the hell out of me Shelly had dated a girl. And this Samantha is even more mysterious than Shelly. The difference, though, is Shelly is a warm and fuzzy kind of mysterious while Samantha’s got a creepy, cold vibe going on. Her mannerisms are so odd that I get the feeling she stepped out of an Edgar Allen Poe novel. Like his books, I can just feel this won’t end well.

What really bothers me is how infatuated Samantha and Shelly are with each other. Shelly tries to hide it but I can see she’s changed considerably and is way more self conscious. After all the nervous chats inside my own head about why Shelly was behaving strangely, now I’m facing the very real possibility that I was never good enough for her. Was Samantha the reason, all along, that Shelly kept me at a distance; physically and emotionally?

I don’t know where I stand or if I should even ask about it because I’m just making a bunch of stuff up. It’s just that the way they look at each other tells me there’s some unfinished business between those two…it drives me insane! Even worse, Samantha seems to be everwhere Shelly and I go but never talks to us. A quick glance then…gone.

Shelly volunteered the only information I know about their past together but that hasn’t been much. Shelly said they dated about a year before she met me and then Samantha had to leave. Oddly, they never kept in touch. Shelly said their relationship “ended after Samantha left” and she thought it was because they had fundamental differences on how to treat people. Actually, she didn’t say people, she used a different term but I can’t remember it now.

What I do know is this whole thing makes me extremely nervous, even more so than when I was struggling to ask Shelly if there was something wrong with our relationship. I’m thinking I may now have the answer, and I don’t like it. I have no idea what may happen but I’m thinking this doesn’t end well. For me at least…

Previous Bigfoot Was Spotted Near Phillipsburg, Missouri
Next Werewolves Of The Witches Castle