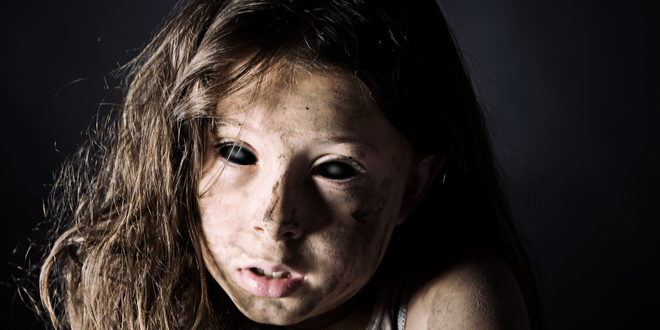 Black eyed children, also referred to as black eyed kids, are an enduring legend which appears to be based on actual facts. After all, even American journalist Brian Bethel detailed his encounter with two of these eerie creatures, and he has been quoted as saying the childlike beings had no pupils or irises in their coal black eyes.

It took Bethel two years to release information about his encounter in 1996 and perhaps his delay was driven by the potential damage the story could have done to his professional career. Fortunately, Bethel did come forward, eventually, and his report added some much-needed credibility to the existence of these supernatural beings.

What Happened to Brian Bethel?

Bethel claims he was approached while sitting in his vehicle by two boys who appeared approximately nine to 12 years old. The boys were wearing hooded pullovers and they knocked on the driver side window to capture Bethel’s attention. The journalist initially assumed they were going to ask for some money so he cracked his window open slightly to allow the boys to speak. At this point, Bethel felt an uncontrollable and incomprehensible fear grip his entire body; he couldn’t figure out how such a strong sensation could overcome him while he was in the presence of two children.

While Bethel battled with this fear, one of the boys asked for a ride in order to pick up money at their mother’s house so they could go see a movie. Because they were children, Bethel contemplated granting their request but he felt what he later described as a “vortex of all-consuming terror” when he allowed his gaze to return to the eyes of the children. The journalist became convinced he was looking into soulless orbs belonging to vampires or some other legendary creature. Instinctively, he felt compelled to roll up his window. What was even more disconcerting to him was his hand had subconsciously moved toward the door handle to let the kids in without even realizing what he was doing. He jerked his hand back, alarmed.

The two boys became frustrated with his actions and one of them started banging on the car while saying neither of them could enter the vehicle unless Bethel told him that it was okay. Understandably, Bethel made the decision to drive away instead and this action likely saved his life from creatures of almost certainly supernatural origins.

How Common Are the Sightings?

There are hundreds of eyewitness accounts similar to Bethel’s experience adding to the credibility these creatures are more than a myth or urban legend. In fact, sightings of these terrifying black eyed children are much more common than many of the other popular paranormal and cryptid beasts usually featured here on Monstrum Athenaeum. In almost every instance, the children are found in groups of at least two and they ask for permission to come inside the person’s home or vehicle.

Those people who have encountered these creatures and allowed them to come inside reported experiencing the overwhelming feeling of dread which Bethel mentioned in his report. The children typically use a ruse such as needing to use the telephone or the restroom in order to gain access to their chosen victim’s home. Once inside, they position themselves on both sides of their victim, making it difficult for that person to get away. People who have had this experience have stated the black eyed children told them they are going to be collected which makes us wonder if they might be vampiric children sent by adult vampires to capture human slaves who can provide them with a regular source of food.

Have There Been Any Other Witnesses?

One of most difficult things about determining whether or not a sighting is actually real is taking a close look at the credibility of the person in question. For example, journalist Brian Bethel is easier to believe than many other people because he has been professionally trained to remember important details and to tell the truth without adding in a lot of his own opinions or conjecture.

Another reported encounter involves an airman who was in training to join the Special Forces. This man, who wishes to remain publicly anonymous, was located at a Texas military base when he was terrified by his second interaction with one of the black eyed children. During this encounter, he heard someone knocking very loudly on his window and the source of the knock was a thin, cruel looking youth who could not have been more than 18 years old. The airman attempted to get the boy to go away by saying he was going to bed but the child was undeterred.

Instead, this black eyed child continued knocking until the military member opened his blinds and stared at him. At this point, he felt a strong sense of unease wash over his entire body and he knew something was wrong when the boy asked if he could come into his room. The airman threatened to beat up the boy and this caused the creature to give up and leave.

Interestingly, this was not the first time this same creepy boy or someone else who looked a lot like him had come across the airman’s path as he had a similar encounter two years previous while working at a local gas station. During this incident, the boy knocked on the shop’s glass window for almost five minutes and he refused to leave until he was threatened with a baseball bat. In both situations, the airman felt extremely uneasy and was convinced his life was in danger.

This is consistent with encounters people have had with vampires but it must be even more disconcerting to experience these sudden emotions while looking at a child. It is also interesting to compare this story to Bethel’s because it brings up the question of whether or not the airman is a prime target which these vampire-like black eyed children are determined to collect. He describes himself as being 6’7” and 270 pounds, so this would most likely make him a highly desirable specimen for any type of blood farming experiment.

What Can We Learn from all this?

Every reported incident involving one of the black eyed kids gives us an opportunity to learn about their motives and true identity. Even the incidents reported from less credible sources have very similar themes; young children, completely black eyes, a request for assistance of some sort and an extreme insistence at being allowed inside. We already know vampires typically need to gain an invitation in order to enter someone’s home so it makes perfect sense to connect these creatures with the undead bloodsuckers.

The type of clothing the black eyed children wear seems to indicate they are trying to protect themselves from the harsh rays of the sun’s light but, none-the-less, they are also apparently able to walk in daylight. This is an interesting wrinkle and it’s worth considering if these creatures are actually half breeds resulting from the union of a vampire and something else – perhaps werewolf. Either way, it is abundantly clear these children have a physical form so people who believe they are simply ghosts are on the wrong track.

Encounters with these children have definitely spiked during the last two decades but this doesn’t preclude them from existing prior to recent history. In reality, people are much more likely to share creepy stories with each other via the Internet than they were before everyone became so interconnected which explains the continued rise in incidents every year.

A look back at the popular folklore of the past several hundred years showcases many unidentified and uncategorized creatures. It’s highly likely these black eyed children have been roaming the earth doing their makers’ bidding for as long as vampires have existed. It would even be extremely intelligent for vampires to mix their bloodline with werewolves or other supernatural creature in order to provide their offspring with the ability to capture the attention of others and bring them to their lair.

Fictional vampire stories such as those on True Blood have made it clear that it would not be a wise idea for vampires to attempt to live freely among the rest of society and the increase in forensics technology must make it very difficult to feed often without attracting attention. Therefore, kidnapping a few humans to farm them for their blood would by far be the smartest choice to help vampires continue existing without needing to struggle on a daily basis.

Ultimately, we might never know exactly what purpose the black eyed children serve but it seems reasonable to assume they are real based on the numerous reports made worldwide during the past few decades. In other words, if you ever encounter a child who appears to have solid black eyes, make sure you do not give into their pleas and let them into your home or vehicle unless you are willing to take the chance of being imprisoned as a vampire slave. (Maybe we should add this to our Top 10 List of Ways I Learned How to Become a Vampire)

Instead, you should either ignore the child altogether or tell them you are unwilling to be collected and they should move onto their next victim. It also wouldn’t hurt to place some garlic around your door as a preventative measure to dissuade the children and their vampire masters from attempting to force you into letting them in.

Black eyed children, also referred to as black eyed kids, are an enduring legend which appears to be based on actual facts. After all, even American journalist Brian Bethel detailed his encounter with two of these eerie creatures, and he has been quoted as saying the childlike beings had no pupils or irises in their coal black eyes. It took Bethel two years to release information about his encounter in 1996 and perhaps his delay was driven by the potential damage the story could have done to his professional career. Fortunately, Bethel did come forward, eventually, and his report added some…
The Legend of The Spooky Black Eyed Children
The Legend of The Spooky Black Eyed Children
The Librarian

Previous Are Filipino Children at Risk from a Bloodthirsty Aswang (Vampire & Werewolf Hybrid)?
Next Dear Sarah – May 17th