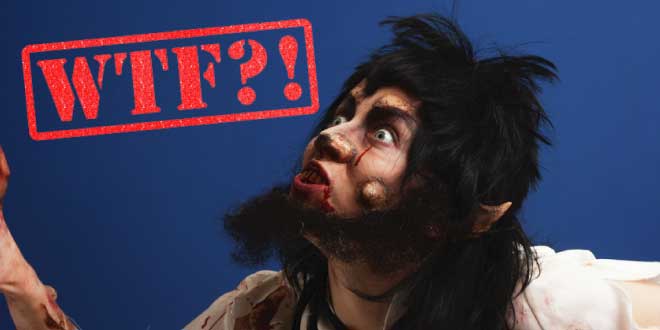 This story, however, is a bit different.

In November of 2015, a news story was released about a supposed Icelandic faith-based white supremacy group with plans to burn churches and detonate bombs in an attempt to start a race war. The religion they practice is called Asatru which is influenced heavily by the belief system held sacred in Nazi Germany during World War 2.

With hashtags such as “#wolvesofvineland”, as well as pictures of sacrificed animals, these modern day Nazi werewolves aren’t trying to kill off vampires, but instead, they’re attempting to turn persons of color against white people.

As if the world didn’t have enough issues, right?

The two men arrested in connection with the terrorism plan, Robert Doyle, and Ronald Chaney, told officials of their faith while in custody.

While this news story doesn’t explicitly note anyone confessing to being a werewolf, it’s interesting that faith, based heavily on wolf lore, is being used to try and bring back an evil not seen since the days of Hitler. The scary part about this is, once the men involved in this cult go to prison, they’re opened up to a whole new world of recruitment for their cause, continuing to spread their twisted schemes into the minds of anyone who will listen.

Nazi racist werewolves operating out of their home state of Virginia and planning to start a race war sounds like a B rated sci-fi, fantasy movie/book. It’s almost too comical to comprehend even. These people are out there walking amongst us, folks. Beware.

Now here's a bizarre story. Normally, when we hear of a story concerning vampires or werewolves getting a little crazy, it usually has to do with violence against each other. And even then, those news stories about men or women convicted of some violent crime, confessing to being vampires or werewolves, turn out to be tales of the mentally ill. This story, however, is a bit different. In November of 2015, a news story was released about a supposed Icelandic faith-based white supremacy group with plans to burn churches and detonate bombs in an attempt to start a race war.…
Racist Werewolves? Now I’ve Heard Everything
Racist Werewolves? Now I’ve Heard Everything
The Librarian
0
User Rating: 1.63 ( 4 votes)

Previous New Sighting Of The Lake Norman Monster
Next The Night Class, Part 10