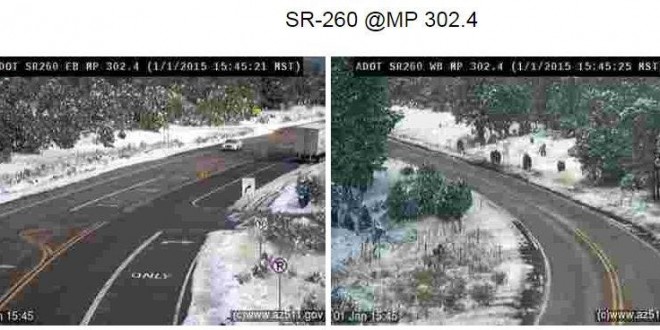 Are Sasquatches Living a Life of Domestic Bliss in Arizona?

On January 1, 2015, at approximately 3:45 p.m., a traffic camera monitored by the Arizona Department of Transportation (AZDOT) recorded an image that has since renewed worldwide debate on the existence of Sasquatches. In most cases, government officials intentionally steer clear of discussing anything to do with cryptids or the paranormal, but someone behind the scenes clearly thought the world needed to see the image. The photo was posted to Facebook on January 2, and indicates the presence of not just one but several Sasquatch-like creatures.

Did AZDOT happen to catch a Sasquatch family enjoying a bit of New Year’s fun or did a government run agency purposefully stage a hoax with the intention of temporarily convincing folks these furry cryptids are real? Well, to answer that let’s look at the official explanation.

According to a spokesperson for AZDOT, the strange figures in the image caught their attention prompting them to post it on Facebook to engage local area residents. However, this entire incident is now being passed off by AZDOT as a humorous joke, but taking this approach (and believing the government has a sense of humor) fails to explain what was actually captured by the highway traffic camera.

Let’s assume for a moment these officials were telling the truth and posted the image because they were bored and had nothing better to do. That doesn’t explain the peculiar and rather perplexing reference to Sasquatch in the post.  You’d think someone would have the wherewithal and foresight to realize the potential worldwide attention a stunt like this could cause. Quite simply, they’re likely backpedaling because it’s obvious someone within AZDOT is embarrassed (or perhaps concerned for their job) by the implication he (or she) believes in cryptids.

Setting aside a potential random act of poor judgment for a moment, Sasquatch and the state of Arizona actually share quite an extensive history so it’s not all that surprising images of these creatures would eventually be recorded by a reliable source. For example, Fort Apache, Arizona, has been the location of many sightings and, most recently, unusual footprints were found in 2010. Former police officer A.K. Riley was the first to notice these footprints and showed them to a local news reporter. Riley was obviously convinced these imprints were the real deal because he now dedicates his time almost exclusively to searching for the elusive beast. However,  he’s not the only person in the area regularly searching for new clues nor is he the first.

C. Thomas Biscardi has been hunting Sasquatch for approximately forty years and decided to search the Fort Apache area in 2006 after a string of reports surfaced alleging Sasquatch-like creatures were targeting people with rocks. While Bacardi, sadly, was unable to find reliable evidence of Sasquatch living in Fort Apache, local residents haven’t stopped from keeping an eye out for the hairy beast.

The history of Sasquatch sightings in Arizona can easily be traced back for many decades in the White River Mountains where loggers have repeatedly reported unusual hominid like cryptids. The local newspaper, “White Mountain Independent,” claims local police officers have taken the sightings seriously enough to collect evidence and analyze hair samples. Unfortunately, the only determination made to date is the fact that at least some of the collected hair samples do not come from humans. While not the smoking gun some would like, it’s doubtful a police department (with its access to resources) would be unable to conclusively identify the species those hair samples came from unless it was truly unknown.

Perhaps even more interesting are the several sightings recorded by the White Mountain Apache police.  At least one police officer has given an on camera interview during which he admitted witnessing a cryptid. It’s worth noting Native Americans in the White Mountain area have indicated Sasquatch encounters are becoming much more prevalent leading some to speculate mankind’s encroachment into their territory is having an impact on their habitats.

According to eyewitnesses, the Mogollon Monster is a bipedal humanoid described as more than seven feet tall, with large red eyes, inhuman strength and reddish brown or black fur covering most of its body. The creature is also reported to be accompanied by an extremely unpleasant and strong odor. In fact, “Weird Arizona” compares its unique smell to a mixture of “dead fish, a skunk with bad body odor, decaying peat moss and the musk of a snapping turtle.”

Footprints attributed to the Mogollon Monster are approximately 22 inches long indicating an unusually wide gate, even for a Sasquatch-like cryptid. Witnesses have noted the Mogollon Monster has a history of violence and by all accounts is both omnivorous and nocturnal. Hallmark traits of the beast includes terrible screaming, decapitating wildlife, and an unusual silence and stillness falling over the woods just before it appears.

Sightings of this creature go back as far as 1903 when I.W. Stevens told a reporter from “The Arizona Republican” that he had seen an unusual and beastly creature drinking the blood of two cougars near the Grand Canyon. Stevens went on to report that the beast had an unearthly scream and long claws. In the mid-1940s, cryptozoologist Don Davis had an encounter during a Boy Scout trip that would end up influencing his choice of career. Davis saw a huge creature near Payson, Arizona, that had a very square face with hair covering most of its body and extremely massive arms at least six inches in diameter.

As of 2006, members of the White Mountain Apache Nation claim to have spotted the Mogollon Monster multiple times and their reports are consistent. For example, each person has stated it was very tall, hairy and took very big strides while walking. Contrary to some reports, though, there have been no negative encounters leading to injuries or fatalities even though the cryptid is seen quite regularly on the reservation.

At the end of the day, the photo taken by AZDOT’s highway traffic camera falls under the heading of ‘soft evidence’ yet it is, by far, one of the most compelling pieces of evidence posted recently. And while this photo is definitely eye-catching, it’s worth mentioning that it’s not the only recent evidence that Sasquatches are actually real. A stunning video taken in Northern California by someone using a drone camera seems to show proof that a creature covered in black fur is very real. According to “The Paranormal Review,” the person who gave them this footage seems to be extremely credible, and they were not able to find anything to indicate that the film was faked.

Have you ever had an encounter with a cryptid that matches the description of Sasquatch or the Mogollon Monster? Leave a comment and let us know all about it!

Previous Hunting Hoax Or Was Bigfoot Caught On A Trail Cam?
Next Is a Zombie Like Hunger Driving North Koreans AWOL