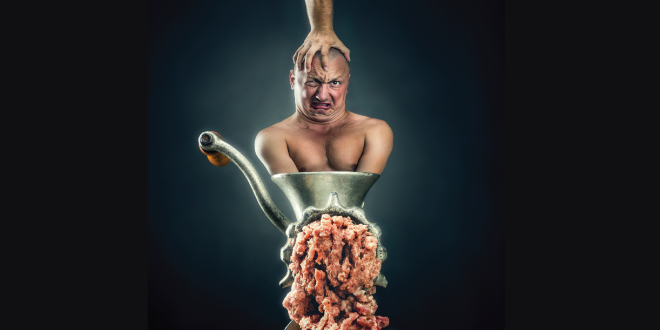 Participants in the “special event” got in touch with their zombie side by discovering what it would be like to chow down on human flavored burgers.

How To Serve Man (Literally): Human Flavored Burgers Anyone?

Without a doubt, cannibalism has been part of society (good or bad) since the beginning of recorded history. More recently, in popular culture, cannibalism has found its place in cinema as featured in several movies and TV shows, including “Silence of the Lambs” and “The Walking Dead.” However, British chef James Thomlinson might have taken things a step too far with his recent decision to give away a limited edition burger which reportedly tastes almost identical to human meat.

Participants in the “special event” were able to get their zombie on and discover what it would be like to consume cooked human flesh by tearing into a human flavored burger. Those who could not attend have the opportunity to make their own human flavored meat by utilizing this recipe.

According to Thomlinson, who researched first-hand accounts of individuals who had actually tried human flesh, we taste like a combination of minced veal, pork and bone marrow (what a relief…we don’t taste like chicken!). However, the chef didn’t indicate how or if he was able to test the accuracy of this mixture, leaving us to wonder whether or not actual cannibals were involved in the testing process. Perhaps he was just guessing at the taste based on historical accounts but it’s still the thought which is disturbing.

There are still many cultures where human meat is considered a delicacy so it wouldn’t have been too difficult to find people who could accurately compare the fake version to the real thing. It’s also interesting to wonder if the recipe itself is simply a cover story. Is it possible Thomlinson wanted to experiment with real human flesh and fed the results to an unsuspecting audience of horror fans? Either way, what a great story – serial killer chef feeds unsuspecting crowd real human burgers instead of expected fake flesh!

When the news first broke the story about Thomlinson’s plan, there were comments from people worldwide appalled by the idea of eating something designed to taste like human meat. Understandably, being placed on the menu might make a few people feel uneasy; not to mention the social conditioning against eating your neighbor.

What’s disturbing is many people were intrigued by the possibility of at least sampling human flesh. Admittedly, it’s natural to be curious, and many animals do resort to cannibalism for a variety of reasons, including eliminating dead bodies. However, this may be a step too far and definitely enters into Soylent Green territory.

There have been several chefs throughout history experimenting with the real thing but it’s difficult to know how many others have tried to duplicate the taste of human flesh. There was a product known as Hufu marketed in 2005 and the Hufu website claimed the product was tofu that tasted like human meat. Although Hufu is no longer available, it was featured in several news articles and in an interview on “The Daily Show” before the website was pulled down. During the aftermath of this unusual product launch, the CEO of the Hufu Company claimed the entire thing had been a hoax.

However, the story is inconsistent because some consumers were reportedly able to acquire Hufu in 2005. Perhaps the truth was a lot closer to Soylent Green than most people would be willing to accept. No matter what actually happened, though, it’s clear from the Hufu experiment people are intrigued by the idea of food products tasting like human meat. The most interesting aspect, if not ironic, of Hufu was the branding as a vegan friendly product. In other words, no actual animal or human products of any kind were used during its creation. This almost seems too good to be true, no wonder Hufu is no longer sold to the general public.

Urban legends abound from areas where cultures consider human meat a rare delicacy. However, in what may be urban fact, there have been reports out of Nigeria by the International Business Times alleging human meat is illegally sold within these areas. Specifically, a restaurant in Nigeria was closed by police in February 2014 after a local resident tipped off officials that something unusual appeared to be happening. During the raid, police officers found two human heads. There have been a few other news reports out of Nigeria regarding cannibalism but the Nigeria Tribune reported this was the first incident of human meat being found in a restaurant.

While isolated, this phenomenon to taste rosemary crusted homosapien has led to growing outrage against such acts by horrified citizens. Going a step further, it’s not uncommon for the public to take matters into their own hands when a cannibal is discovered in their midst. In a similar incident, HNGN.com reported two men who were suspected human flesh eaters barely escaped with their lives in Lagos last September. The two alleged cannibals were almost set on fire by a lynch mob before the local police stepped in to keep them from killing the men. Another similar and gruesome story occurred in Pakistan where two brothers developed the nasty habit of digging up bodies from a graveyard and turning them into stew.

Cannibalism is illegal in most areas and, as such, consuming human flesh is bad idea if you value your freedom and social reputation. However, ignoring the legality of the act, would it actually be safe to eat another human being?

Famous cannibals such as Jeffrey Dahmer may have given the impression our bodies easily digest human meat but there are several risks involved aside from the obvious moral aspects. For example, there is a disease called Kuru associated exclusively with cannibalism. The disease was illustrated in the Book of Eli by depicting cannibals as having uncontrollable shakes caused by neurological disorders. Anyone contracting Kuru typically dies within a few years from the first signs of symptoms which include loss of balance, headaches and tremors. Eventually, Kuru will cause your brain to completely rot away and there’s no current preventative treatment. There are also a few other diseases caused by cannibalism; none of them easy to treat or reverse. With this in mind, might be best to avoid cannibalism at all costs.

With all of this knowledge, it’s very curious to consider why people in developed countries would still consider sampling human flesh as a delicacy. Perhaps it is simply indicative of a longing to test their personal limits but it would certainly be difficult to explain to their doctor, family and friends how they developed a neurological disease associated with eating the dead. For shameless promotion and notoriety, it does make sense some chefs might experiment with the possibility of providing a human flavored dish sans the risks of actual cannibalism.

Well, did this article make you nauseous or hungry? Sound off in the comments below to let us know if you would be willing to try a human flavored burger or even the real thing now that you know the potential health consequences of taking such action.  We won’t tell anybody – just don’t register with your real name.

Without a doubt, cannibalism has been part of society (good or bad) since the beginning of recorded history. More recently, in popular culture, cannibalism has found its place in cinema as featured in several movies and TV shows, including “Silence of the Lambs” and “The Walking Dead.” However, British chef James Thomlinson might have taken things a step too far with his recent decision to give away a limited edition burger which reportedly tastes almost identical to human meat. Participants in the “special event” were able to get their zombie on and discover what it would be like to consume…
How To Serve Man (Literally): Human Flavored Burgers Anyone?
How To Serve Man (Literally): Human Flavored Burgers Anyone?
The Librarian