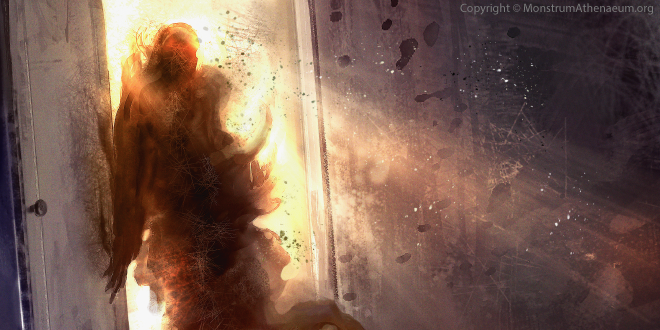 Shadow People: Are They Ghosts or Something Even Worse?

I tend to describe urban legends as “stuff” that happens which people believe is true but isn’t.  Sometimes, they originate innocently and other times, they are deliberately fabricated for whatever reason. Often, the easiest urban legends to debunk are those based on lurid stories created entirely out of fiction and have a single point of origin. At Monstrum Athenaeum, cryptids or strange occurrences apparently falling into the urban legend category are placed in “The Pub”, for your entertainment. Today, I want to have a conversation about mysterious beings known as ‘shadow people’ and make the argument that perhaps these entities, whatever they may be, are more than just urban legends.

Let’s start with asking the question, “Is there any truth behind pop culture references and eye-witness encounters of mysterious beings known as shadow people?” While there do appear to be consistent contemporary references supporting their existence, admittedly, there’s still a significant lack of information to clarifying whether or not these creatures are ghosts or perhaps more malevolent figures. Not surprisingly, there are plenty of skeptical researchers arguing shadow people are simply the results of night terrors, sleep deprivation, or the side effects of drugs. But those arguments don’t explain the numerous sightings and leads one to question if there’s more to this than merely a trick of the mind.

Individuals who’ve encountered shadow people typically report feeling an oppressive or evil presence and describe them as humanoid figures surrounded by shadowy, dark patches. Based on this description alone, is it possible they’re ghostly manifestations of evil persons or the collection of negative energy associated with a tragedy? If not, then are they an entirely different type of malevolent entity such as a demon? Let’s take a look and see if we can find the answers.

Let’s start with the night of April 12, 2001. A late-night radio talk show, Coast To Coast AM, featured a Native American elder as a guest who explained, first hand, what it was like to encounter a shadow person. The segment sparked listener interest into the topic and soon people submitted their drawings and personal stories describing their encounters with something matching the description of a shadow person. These entities were described as dark, humanoid framed silhouettes and best explained as seeing someone from your peripheral vision. Certain witnesses reported feeling as though the shadow person physically tried to choke them and jump on their chest.

It’s worth noting that, even though, most encounters describe these mysterious shapes as extremely menacing, including reports of attempted harm, this does not necessarily mean every shadow person has a malevolent intention. In fact, paranormal investigators and authors are not entirely convinced they want to hurt people. Instead, they theorize many shadow people are either neutral or helpful.

As mentioned earlier, no one knows what these creatures are but that’s never stopped speculation. Paranormal experts are divided into two basic camps. The first maintains shadow people are ghosts, pure and simple. The second believes shadow people are extra-dimensional inhabitants residing in an alternate universe that sometimes becomes visible through a quirk in the time-space continuum. Try saying that three times fast!

Whether or not shadow people are ghosts or extra-dimensional beings may be up for debate but based on the consistent descriptions given by eyewitness accounts, paranormal researchers have created five classification categories. Knowing the difference between them could help you determine the exact nature of the paranormal encounter you’re having and whether your guest cryptid is a shadow person or something else entirely. In no particular order, here’s the list of the five categories:

There are substantial references to shadow people in pop culture, including a very prominent appearance in the novel and movie “John Dies at the End.” The first modern appearance of a shadow being took place on October 22, 1977. A children’s cartoon entitled “Dynomutt, Dog Wonder” aired an episode named “Shadowman” that was primarily focused on The Hat Man. Additionally, there was a movie released in 2013 called “Shadow People” that mixed real and fictional footage to depict a sleep study conducted by the Centers for Disease Control and Prevention. The documentary series “Extreme Ghost Stories” has also centered two episodes on the real-life study of these entities.

Perhaps the most unusual usage of shadow people in pop culture can be found within the “Deep Sleep” video game series. These games have the premise that shadow people are very real and have existed since the dawn of mankind. However, the shadow beings in this fictional universe are confined to lucid dreaming and have the ability to possess people while they are sleeping.

A gentleman named Bishop James Long has conducted 27 exorcisms to date and is well-known amongst paranormal researchers for his class on demonology. Long also works as a pastor at a church in Louisville, Kentucky, and is convinced shadow people are real. The Bishop has been quoted saying these entities “are demonic in nature” and that they “should be avoided at all times.” Long has a theory about what shadow people are, arguing the black form represents the energy of the human spirit attempting to manifest itself visibly with the same physical characteristics it once had while living. Long has emphatically warned these entities may purposely attack the living to draw from their energy.

Back to the original question, at what point do consider these beings as more than an urban legend? After all, without a common origin to tie them all together, it becomes increasingly difficult to deny their existence. Generalized dismissals argued by skeptics begin to lose stream when there are just far too many witnesses who have come forward with varying circumstances. Even though we still do not know specifically what a shadow person is, it is likely these entities are more than imaginary and have the potential to cause significant harm if they so desire. With this in mind, it is advisable to follow Bishop James Long’s advice about steering clear at all costs.

I tend to describe urban legends as "stuff" that happens which people believe is true but isn't.  Sometimes, they originate innocently and other times, they are deliberately fabricated for whatever reason. Often, the easiest urban legends to debunk are those based on lurid stories created entirely out of fiction and have a single point of origin. At Monstrum Athenaeum, cryptids or strange occurrences apparently falling into the urban legend category are placed in "The Pub", for your entertainment. Today, I want to have a conversation about mysterious beings known as 'shadow people' and make the argument that perhaps these entities,…
Shadow People: Are They Ghosts or Something Even Worse?
Shadow People: Are They Ghosts or Something Even Worse?
The Librarian

Previous Werewolves Of The Witches Castle
Next Dear Sarah (Diary Entry No. 7)