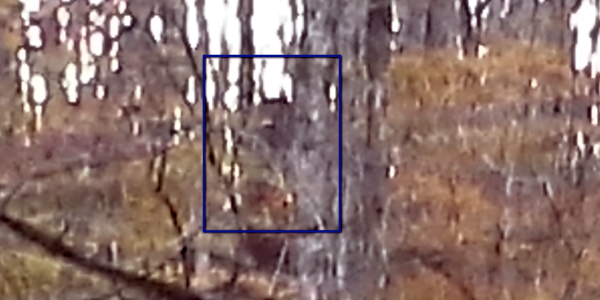 John is convinced the dark, shadowy spot in that image is the legendary Sasquatch. (Image courtesy John Boutwell)

Skeptic to Believer: Will This Sasquatch Picture Also Convince You?

Whether or not you actually believe in the existence of cryptids, there may come a time when you encounter something truly unexplainable. Perhaps a momentary glimpse of something moving quickly through the shadows or the crackling of breaking branches in the brush, but, never-the-less, enough to stop you mid-step and raise the hairs on the back of your neck. More than likely, the first thing which comes to mind is “What the hell was that!?” Such is the case with a man named John from Luttrell, Tennessee, who inadvertently captured something unexplainable while taking photographs off his back porch and asked our community for help identifying it…

John Boutwell grew up in the small village of Fairport, New York. The town was picture perfect – an ideal location for any family to raise their children. Not really sure when he first heard of Bigfoot, John said he does recall the time a circus came through his childhood stomping grounds and one of the more interesting attractions in the travelling freak show was a frozen ‘Bigfoot’. While John admitted he doesn’t know if the display was fake or real, he does believe the oddity made a lasting impression on his young psyche.

It’s easy to imagine the darkness of dimly lit circus tents, the aroma of popcorn blowing gently through the night air, and a young boy transfixed by a side show attraction. Whether or not that frozen cryptid was real is irrelevant; the memory it created is very real – just the same. Serendipitously, that memory would one day resurface when that boy, now an adult, captured his own photographic proof Sasquatch (Bigfoot) exists.

Today, John Boutwell is all grown up living a rather ordinary, everyday kind of life.   John is active on the internet, selling frequently on eBay and updating his Facebook page.  In early November, John wanted to make extra spending cash for the holidays by listing a few items on eBay but his old, trusty camera finally gave out. Resourceful, John decided to learn to use his cell phone camera but was unfamiliar with the settings so he started taking random shots of the trees from his front porch.  Curiously, when John looked through the pictures he found a few ‘spots’ he couldn’t quite make out on the phone’s small screen.

To get a better look, John transferred the pictures to his computer. Upon closer inspection, with the advantage of a larger monitor, John was able to identify one of the ‘spots’, in the middle, as a large tree stump.  However, a second ‘spot’ in the upper left corner (identified with a blue box around it) was perplexing because, unlike the tree stump, in subsequent pictures of the same area, the spot was eerily absent. At first, John thought perhaps he snapped a picture of a regular brown bear but when he searched the area, he found no tracks. Shifting his search from the ground upward, John realized branches had been broken in that location at least twenty feet up into trees. John was convinced no ordinary brown bear had been standing a stone’s throw from his home.

John’s home in Luttrell – part of Union County, is located in the northern section of an area known as the Great Valley of Eastern Tennessee. Situated just below the Cumberland Mountains and above the Unaka Mountains, John’s home is located between two mountain ranges known as hotbeds for Sasquatch activity. Although there haven’t been any other sightings recorded in Union County to date that we could find, according to The Bigfoot Field Researchers Organization, there were three sightings in neighboring Campbell County (Cumberland) from 1995 to 2003 and a whopping six in nearby Sevier County (Unaka), between 1970 to 2008. If you map the individual sightings in the area, you’ll find a clear line traveling between these two counties – just west of Boutwell’s home in Luttrell.

Thought to be reclusive and territorial by nature, it’s not often Sasquatch are witnessed at all, but John’s account is enough to make you wonder if human activity in the region has perhaps affected the migratory patterns of these shy creatures. If true, then we can expect to hear of more encounters from residents in the near future.

A big mystery on his hands, John posted the pictures of the unknown creature on Facebook hoping someone would identify it. After receiving feedback from his friends and family, John is convinced the dark, shadowy spot in that image is the legendary Sasquatch. However, John says other people in the area where he lives aren’t so warm to the idea. According to John, “People around here don’t talk about it. When I say anything (about Sasquatch) they think I’m crazy, I guess.”

Is John really crazy or did he actually capture a picture of Bigfoot?

After receiving both positive and negative feedback, John reached out to Monstrum Athenaeum and asked for our help identifying the mysterious figure. Intrigued by John’s encounter with something unknown, we agreed to share John’s pictures with our community.

When asked how this experience has changed him, John replied, “Well, now I’m sure they’re out there. Before this I was a believer /skeptic- I was hoping they were, but with all the fake stuff out there I was getting discouraged.  But now I know, because I got the picture to prove it.” John is positive the pictures taken near his Tennessee home are indeed Sasquatch. The experience has turned this man from a mild skeptic to a full blown Sasquatch believer.

Now, we are asking for your help identifying the strange creature in the pictures. If you think you know what it is, would you please post a comment below or reach out to John on Facebook?

You can also send us an email at librarian@monstrumathenaeum.org if your shy.