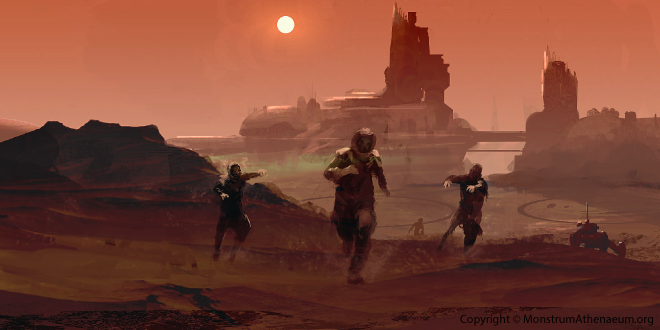 I looked out the window at the ugly alien planet looming large as we approached. I was with a group of other criminals on a manned expedition traveling to Mars to explore its surface and help conduct research for future colonization. That was the politically correct explanation we were given by the Collider Research rep who visited the prison to get me and ten other inmates to volunteer for the mission.

Since all of us were prisoners on death row, I figured the reality behind it was we were being sent there to either work ourselves to death or act as some kind of human guinea pig for some unsavory business on that desolate ball of red rock. I am a realist at heart and knew we weren’t going there for anything good–at least as far as us convicts were concerned.

The orangish-red glow from the planet shining in my window reminded me of a cheesy B-Movie horror flick I saw when I was a kid–something about a giant amoeba with eyes that rolled around like a carousel and a huge spider-monster thing with a rat face. Everything on the planet in that movie was alive and trying to eat the astronauts, I remembered. It scared me when I was little but I was sure I’d laugh if I saw it again. It even had a cheesy name – Space The Deadly Frontier!

There was nothing like that alive on the rough terrain on the planet, we’d always been told, which was kind of disappointing after watching the movie. My name is Brock Henderson, and I had been placed on death row after killing my wife. I told them she took off with another guy when I really just killed her for her insurance money. I wasn’t too smart about it and got caught.

Oh well, sucks to be me – I had read on the news they had been doing colonization on the planet for decades. The colonization started after there had been some private funding by a group of rich crazy guys with too much time on their hands and they wanted to send a group of civilians to Mars . The group called themselves the Collider Research team, and they owned most of the wealth on Earth. However, there was a snag to their Mars colonization efforts because of the planet’s giant dust storms. The huge storms would develop in a few hours and cover the entire planet in just a few days, making it inhabitable.

That was before the scientists reported they had found a way to predict the storms–problem solved, the spokespeople for Collider Research announced on the TV. The green light was turned on to go ahead with the mission and hundreds of people lined up to go there. Some people were thrilled with the concept of space exploration. Not me, the wonder of all things had been kicked out of me a long time ago.

The Collider Research team constructed a space station near Mars and the colonists left the Earth in space vessels to build the cities and make them livable. An announcement would be sent to them if a dust storm was eminent and they would evacuate the planet before the storms happened–just like in a hurricane.

Trouble was, the Martian dust storms, just like hurricanes, are highly unpredictable. A warning was sent to the colonists when the last dust storm was developing and heading their way. No one got off the planet in time, though, the news reported, and everyone was lost. It was rumored that the technology to predict the storms was sound but budgets were strained–no one was really watching the signs that a storm was brewing, but no one was able to prove it.

We stopped at the derelict space station on the way to Mars. It had been used and left in pretty much the same shape it was in when the last colonists stopped there years before. It was dark and quiet as death. The researcher and his marine escorts that accompanied us to the planet didn’t find anything they could use, and we took a few supplies and left. We continued on to Mars and landed there. All of us had been trained on how to suit up and set up camp, so we did it and settled in for the night. The planet felt so alien–there was no way to explain how unsettling it made you feel. The closest thing I could think of was claustrophobia. No one slept well that night.

Me and another guy named Steve were scheduled to go out on the first detail. We suited up and one of the soldiers hopped into the rover with us. The ramp inside the ship was lowered down to the Martian soil to let us out. The soldier drove us to a place we were to go to work at. We got the gear and the shovels out of the rover and went to the area to dig and get samples and bag them. When we walked over to the area, we got the shock of our lives. In the distance you could see the domed city the colonists lived in. The news reported that everything had been wiped out. Yet, there it was, and it was obvious that it would have withstood high winds and did. Where the hell were the people, though?

Steve and I looked at Major Dickhead and he motioned for us to just keep digging. He put his hand on his weapon to let us know he was serious, so we just kept working–digging and bagging and tagging samples. Steve was working to my left a good ways away from me, and all of a sudden out of the corner of my eye I saw him hit the ground. Then his body just started convulsing like he was having a fit. Great, either he’s got epilepsy or some serious stuff is going down. The marine headed toward him to help and a few minutes later, he fell on the ground and did the same thing. OH CRAP!!

Then the ground started to move in places around me, and I saw leathery hands push their way out of the red sand. Mystery solved on where the colonists were. They were erupting out of their sandy graves around me–thousands of them! Space Zombies! One rose up close enough for me to almost touch and pitched forward towards me where she had been laying in the ground face up, bits of long hair straggling from her leathery skull. She opened her mouth and sand and spiders poured out of it onto the ground. Jesus Christ! Space Spiders to go along with the Space Zombies. The spiders started crawling toward me, and I knew she wouldn’t be far behind them in a minute. I turned toward the rover, and a group had already formed there, blocking my access to it. They were all dried out and withered, even the spiders–they reminded me of a story I read about ticks that could stay dormant for twenty years, waiting for a bloody meal to revive them.

The zombies were on Steve and the marine, and they started ripping their spacesuits open to devour them. I’m sure those ugly little spiders were eating their share, too. Soon I couldn’t see them anymore for all the zombies covering them up. It was too far out to head back to the ship on foot, so I made up my mind to hightail it to the domed city in the hopes I could get in and the air system still worked. Then I felt the crawling sensation on the inside of my suit and they gave a silent signal for them to bite me all at once. I fell to the ground after that. What a hell of a way to go.

I looked out the window at the ugly alien planet looming large as we approached. I was with a group of other criminals on a manned expedition traveling to Mars to explore its surface and help conduct research for future colonization. That was the politically correct explanation we were given by the Collider Research rep who visited the prison to get me and ten other inmates to volunteer for the mission. Since all of us were prisoners on death row, I figured the reality behind it was we were being sent there to either work ourselves to death or act as some kind of human guinea…
Space The Deadly Frontier
Space The Deadly Frontier
The Librarian