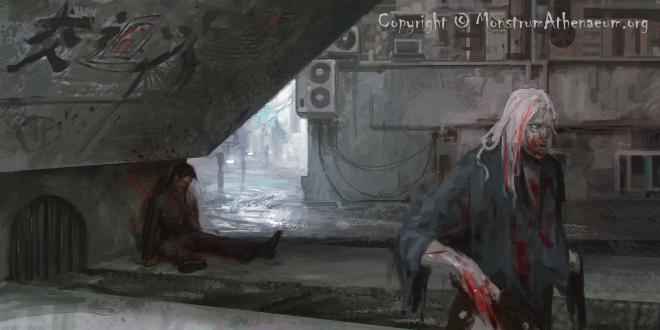 The physical appearance of a jiangshi varies significantly depending upon the origin of the creature, often described as a cross between a vampire and zombie.

When many of us hear talk of reanimated corpses staggering stiffly around the streets with their arms outstretched, trying to eat people, we think “zombie”.  But if you’re in China, yelling “Zombie” in a crowd just might go unnoticed. Instead, if you want to motivate folks to flee the advancing undead hoard, you’re better off screaming “Jiangshi!” No, not the Chinese poet from the 1800’s but rather a deadly creature transfixed on draining your life.

To be fair, the term jiangshi doesn’t correlate directly to the word zombie but it’s close enough for practical matters and the result is the same if one catches you.  These undead creatures are considered by many to be a type of vampire because they avoid sunlight and prefer to rest in their burial places. If unable to reach their coffins or graves by morning, they’ll take refuge in a cave or similarly dark place until nightfall.  Just like the Night of The Living Dead zombies, these creatures lurch about with their arms outstretched. Any poor soul unlucky enough to fall within a jiangshi’s grasp will have his life force, or qi, sucked from his body.

Jiangshi lore is ancient, and there are 17th-century references by scholars of the Qing Dynasty discussing these creatures.  One scholar, Ji Xiaolan, documented the various methods by which a person could end up as a jiangshi.  These included:

•    Possession of a corpse by a spirit;

•    The deceased absorbs sufficient life force to return to life;

•    A person’s soul becomes trapped in the body after a violent death, suicide or because they were an evil person; and

•    Similar to the Western zombie, they’re infected with the ‘virus’ from another jiangshi and change into one over time.

The physical appearance of a jiangshi varies significantly depending upon the origin of the creature, often described as a cross between a vampire and zombie.  The most concerning description is that of a healthy, uninfected person because the creature is virtually undetectable. On the more familiar end of the spectrum, these creatures take on a form typically associated with a zombie; rotting, decaying, and unable to move their body in a normal manner. In the case of the jiangshi, hopping rather than walking.  It’s not uncommon for some of these undead to appear with white hair and greenish-white skin attributed to mould growing on their rotting flesh.

While some cryptids are so reclusive that they’re practically creatures of legend, publicised jiangshi sightings have occurred as recently as 2012. In one case, a bus driver, angry with a female motorist blocking his path, exited the vehicle and started beating on the hood of her car.  When the female driver stepped out to confront him, he pinned her down and began chewing her face.  Apparently not a typical reaction to road rage in China, there was immediate speculation that the man had been infected by a jiangshi.

Shortly afterwards, a retired teacher attacked a fellow subway rider over a seat on the train and, similar to the bus driver, started eating the passenger’s face.  Other travellers were unable to break up the fight, scared off by the attacker until the police arrived.

Fortunately,  a jiangshi can be stopped by more than a bullet to the head so if you encounter one of these creatures you have options. Similar to a vampire, these creatures don’t like mirrors and will flee from their reflections.  They are also not overly fond of anything made from peach tree wood. A stake made from a peach tree should work wonders provided you can deliver it on target before being bitten.   Finally, these creatures can be killed using fire. So if you visit China, keep a lighter in your pocket when on public transport, just in case.