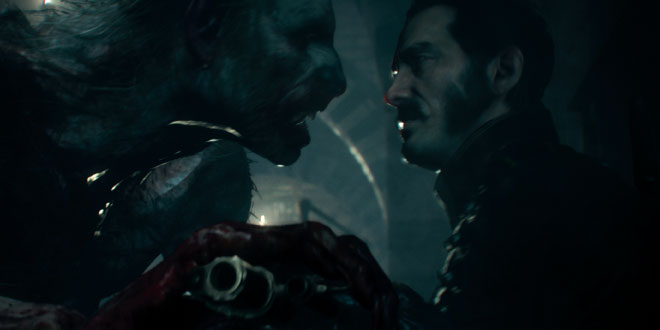 Only a few worthy titles have explored the world of werewolves and these beasts are finally getting attention in the PlayStation 4 title "The Order: 1886".

The Order: 1886 – Tesla & Knights of The Round Table Battle Werewolves

Horror video games are a dime a dozen which makes it odd only a few worthy titles have explored the world of werewolves. Fortunately, these beasts are finally getting more attention in the PlayStation 4 title “The Order: 1886“. The treat of seeing werewolves run a muck in a video game is exciting enough for horror fans, but the developers, Ready At Dawn, took this concept and introduced a fantastic new twist: the game is set in 1880’s London and the story revolves around the Nights of The Round Table who fight against half-breeds (werewolves), aided by the eccentric genius, Nikola Tesla.

The “Order: 1886” was released on February 20, 2015. It’s a third-player shooter game developed exclusively for the PlayStation 4. Actually, calling it a third-person shooter isn’t quite accurate since the game plays more like a movie where the player’s interaction moves the actors along. The game environment is set in an alternate version of London where rudimentary wireless communications and advanced Zeppelins are a major aspect of daily life. Fans of the Steampunk fantasy world will feel right at home.

According to the game’s back story, some of the greatest figures in history, both real and fiction, have been tasked with battling a breed of half-human, half-wolf lycans referred to as “the half-breeds”. Embroiled in secret war, players drive the story along by engaging these beasts in a series of conflicts strewn about the Whitechapel area of London.

While King Arthur does not make an appearance in the game, his group of knights, now called The Order, have survived the generations thanks to a substance called “black water” (you’ll learn the origins of this mysterious liquid as you play the game) and are humanity’s best hope for survival. The knights are determined to put a stop to these creatures as people continue to perish at the hands of these angry beasts. Things finally have a chance of changing in 1886 thanks to The Order, and this is where the gamer comes into play.

It’s a rather obvious and clever choice for any game set in a Steampunk-style version of the 1880’s to incorporate Nikola Tesla. After all, he was one of the greatest innovators of that time period. His research and development in the field of electricity makes him the perfect choice to play the mastermind behind the game’s fictional, advanced technology. For those of you familiar with the feud between Tesla and Edison, you’ll appreciate the subtle, humorous references to comparisons between A/C & D/C current. In addition to Tesla, the fun shout-outs to Steampunk are bound to entertain people who enjoy this particular genre mash-up.

The role of the fictional version of Tesla in “The Order: 1886” goes beyond a namesake. Not only is he credited for inventing the weapons and gadgets for The Order, but the developers went the extra mile by creating a laboratory for players to visit. This definitely puts an intriguing spin on the video game and it’s sure to please science enthusiasts who regard Tesla as one of the best inventors and scientists of all time.

From a visual standpoint, “The Order: 1886” is a stunning release showcasing the power of the PlayStation 4. As mentioned earlier, The Order is as close as you can get to watching a movie and being able to interact with the environment but, for some, there are two major criticisms of the game. First, the limited interaction is a problem for players who prefer a more maneuverable sandbox because they aren’t as involved in the action as they’d like to be. Second, the length of the game is rather short at about eight to twelve hours which has some wondering if the price tag is justified. However, the animation, voice over acting and script are amazing so you can easily see where the development money was spent.

Criticism aside, if you’re interested in horror, particularly of the lycan variety, “The Order: 1886” is a simply stunning game which is well done and terrifying to play. The atmosphere, story line and weapons are all creative and engaging enough to capture the attention of most players, although some might not get a lot of replay value out of this video game. There’s also a nicely done plot twist that sets up subsequent story lines but we won’t spoil the game by telling you; that’s half the fun of playing the game.

As mentioned earlier, even though game developers have underutilized werewolves, there are a few worthwhile games where you’ll encounter these beasts. “The Elder Scrolls V: Skyrim” has an unexpected werewolf plot twist, and 2013’s “Blood of the Werewolf” allows you to play as a female shapeshifter. Other unusual highlights include “The Wolf Among Us” and Link’s turn as a werewolf in “The Legend of Zelda: Twilight Princess.”

In total, there are fewer than 20 video games we could find which include a werewolf creature, but hopefully these beloved beasts will get more love from developers in the future. Ideally, future werewolf appearances will focus on presenting these characters in a terrifying format, as opposed to games such as “Sonic Unleashed” and “The Sims 3: Supernatural.” Either way, though, the most important thing is for every future werewolf title to avoid the problems that plagued the very first game featuring these creatures: “Werewolves of London.” In fact, the negative critical response to this 1987 game is probably one of the main reasons that werewolves have been so rarely seen in video games since that time.

Previous Sasquatch Encounter Reported in Holland
Next Science Has Once Again Saved Us From The Zombie Apocalypse (Well..Some Of Us)