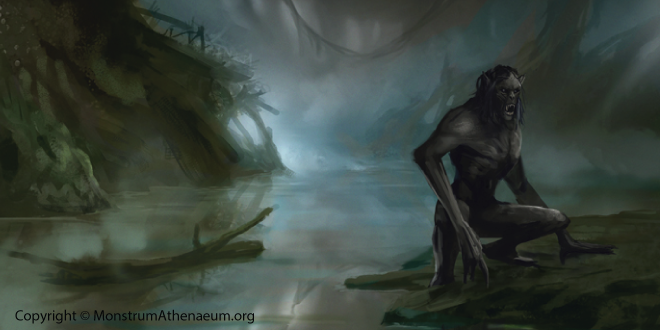 Known locally by their Cajun name, rougarou, these large and terrifying creatures make their home in the swampland around Acadiana and New Orleans.

French supermodels may be the latest on a list of endangered species fleeing France for the US, but they definitely aren’t the first. A little over 250 years ago, another group appears to have been chased away to the safer shores of the US – the loup garou. Werewolf, for those unfamiliar with the French term, sightings of these shapeshifters in the forested areas of Southern Louisiana date back to the 1750’s. Known locally by their Cajun name, rougarou, these large and terrifying creatures make their home in the swampland around Acadiana and New Orleans.

Rougarou are commonly described as creatures with human bodies and canine heads, similar to a dog or wolf.  Occasionally, some observers have likened sightings of the cryptid to a Bigfoot-type creature, similar to the Honey Island Swamp Monster, because of its enormous 10 foot stature and matted dark hair with blazing red eyes.  Curiously, there’s a superstitious angle to these beasts as reports indicate the creature takes the form of a shadow that haunts those unfortunate souls who trespass into its territory late at night. The sightings of the shadow usually precede the manifestation of the noncorporeal entity into a ravenous beast.

Origins of the rougarou are vague but there’s a lot more superstition associated with this manner of werewolf than your garden variety. For example, protecting yourself from being bitten is no guarantee you’ll be free from the curse, simply being caught in the beast’s gaze is enough to afflict you with lycanthropy. While probably more local flavor than anything, no pun intended, legend has it survivors of these encounters must remain completely silent about the ordeal for a period of one year and a day to avoid becoming a shapeshifter themselves.  As a reward for keeping mum, not only are they freed from the curse but so too is the creature that cursed them.

While the Louisiana version of the rougarou is certainly colorful, over embellishment doesn’t necessarily mean the creatures don’t exist. Sightings of these werewolves have also been reported in Canada, where the beasts are known by a similar name – rugaru. The similarity between the names suggests the creatures have a common origin and may have travelled with the French-speaking Europeans as they migrated to Canada and the US.  Another interesting theory suggests the beasts originated in the Americas because Canadian stories reflect possible Native American folklore influence. As an example, Canadian stories claim the afflication of lycanthropy by the creature’s gaze is a permanent condition and the new rugaru is forced to follow the original one, similiar to the legends of the Wendigo. However, yet another idea is that the word actually comes from the Metis language where the word “ruguaru” means ‘werewolf’.

While these legends may read like something from times past, there are also a number of more recent sightings in both Louisiana and Canada.  One such account, detailed in the DeQuincy News, in 1996, told of a woman who saw a large animal at the side of the road while driving along State Highway 12 in Louisiana. She stopped to look and described a creature around the size of a Saint Bernard with thick, reddish-brown hair but with a simian appearance, unlike anything she had ever seen.  The snout was shaped like a baboon’s, the ears were small and pointy and its feet were elongated, sharing no resemblence to a dog.

Previous Interview: Did Steve Krueger Survive An Attack From The Bearwolf of Holy Hill?
Next Sasquatch Genome Project Claims To Have Indisputable Proof Bigfoot Exists