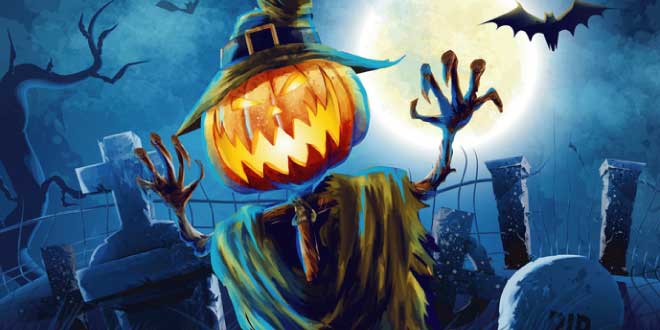 Halloween's just around the corner and what better way to celebrate Samhain then to scare the snot out of the little ones with really scary stories.

Halloween’s just around the corner and what better way to “get in the spirit” of Samhain then to scare the snot out of the little ones with really scary stories. After some digging, we’ve found two lesser-known stories of evil that we’re sure will give you pause to verify your children are safe in bed before turning out the lights.

You see, these two scary Halloween stories are not only true, as terrible as they may be, but they both occurred on Halloween night! So, if your house is locked tight, and you’re safe in your warm bed, let’s get started.

The last thing in the world a parent thinks about when placing an infant child in a crib for the night is awakening to find the baby missing. The mental torment and anguish any mother and father would feel in that situation must be incomprehensibly excruciating.

Unfortunately, this was the case for George and Rose Carter. After placing their daughter, 19-month-old Nima Louise Carter, into her crib on Halloween night in 1977 in Lawton, Oklahoma, they awoke the next morning to discover she was gone.

The frantically searched for signs of an intruder but found nothing. Shockingly, the house was still locked!

It wasn’t until a month later that police found the infant’s body in a refrigerator in an old, abandoned house. The official cause of death was asphyxiation. For the Carter family, there was nothing to be thankful for that holiday. A monster had taken everything from them.

Just a month after Nima was born, in April of 1976, twin girls named Mary Elizabeth and Augustine Jacqueline “Tina” Carpitcher were abducted, also from Lawton, Oklahoma. The twins were in their grandparent’s home, watching a television show when they suddenly vanished; snatched in the middle of the day.

The twins, only three years old, were found two days later, also in an abandoned house locked inside of a refrigerator. Thankfully, one of the girls lived, but tragically the other was not so lucky and died of asphyxiation.

The one link between the abductions was a teenage babysitter named Jacqueline Roubideaux, the babysitter for both families.

Despite the apparent connection between both crimes, Lawton police lacked sufficient evidence to charge Roubideaux with a crime. She remained free for another two years, until 1979, when she was finally charged with two counts of first-degree murder.

It wasn’t until 1983 that a guilty verdict was rendered for the crimes, as evidence against her was still a bit sketchy. The only witness to the murder was the surviving twin, Tina Carpitcher, who pointed out Roubideaux to the police when asked about her abductor. However, the child’s testimony was inadmissible in the court of law, and, therefore, could not be used as evidence.

Jacqueline Roubideaux never admitted doing anything wrong and, as fate would have it, in 2005, she died in prison of liver cancer while still maintaining her innocence.

Did you ever wonder why Halloween can’t shake its association with grisly killings and death, despite the commercialization of costumes and pranks?

While it may have something to do with the Halloween movies (a lesson in diminishing returns), the fact that especially gruesome murders do tend to happen on All Hallow’s Eve doesn’t go unnoticed.

After his dad, William Liske Sr., had remarried, William Liske took to traveling, keeping to himself as much as possible. From time to time, Liske would stop by to check on his father. It was one of these visits that brought him to the family home on Halloween.

No one knows for sure what turned this regular visit into a bloodbath; even Liske himself is not sure why he did it. Although, his schizophrenia and lack of adherence to medication were noted as contributing factors.

Liske had a history of aggressive behavior, and police had been called on more than one occasion to intervene in domestic disputes and assault while he was visiting the home. Whatever it was that set the boy off, it as all that was needed for him to lose complete control.

Liske murdered his family so swiftly and completely that none of the neighbors even heard a scream.

The victims, William Liske Sr., Susan Liske, and Derek Griffin were bludgeoned so severely the police had trouble identifying the victims. The heart-wrenching part of the story is the discovery of the bodies by Devon Griffin, only 16 years old at the time. Devon said he initially thought his family was playing a prank on him.

Liske ran, of course. But he was apprehended by police roughly 170 miles away while hiding in a cottage owned by his father. Liske is currently residing in the penitentiary where he is kept heavily sedated and in seclusion.

Halloween's just around the corner and what better way to "get in the spirit" of Samhain then to scare the snot out of the little ones with really scary stories. After some digging, we've found two lesser-known stories of evil that we're sure will give you pause to verify your children are safe in bed before turning out the lights. You see, these two scary Halloween stories are not only true, as terrible as they may be, but they both occurred on Halloween night! So, if your house is locked tight, and you're safe in your warm bed, let's get…
Two Really Scary Stories To Share This Halloween Night
Two Really Scary Stories To Share This Halloween Night
The Librarian
0
User Rating: 4.42 ( 3 votes)