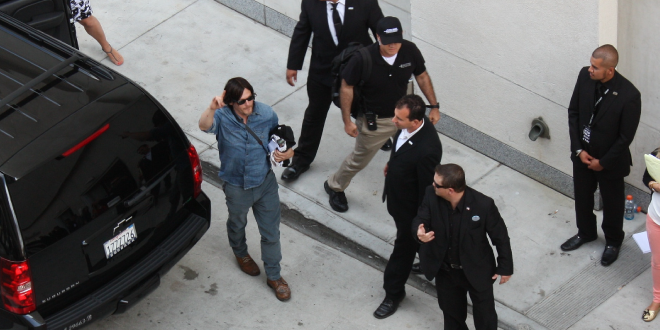 Before the Internet age, it was not easy for people to find out advance information about their favorite shows or highly anticipated movies. In fact, “Star Wars” creator George Lucas is credited with being the person who decided to take fan marketing to a new level by attending an early version of Comic Con with bare-bones information about “A New Hope.” Depending on your point of view, this makes Lucas a genius or the individual who ruined various fandoms by making spoilers such a hot commodity. “The Walking Dead” has definitely gone down the path of offering a lot of teaser trailers and creating media stirs about a wide variety of topics. Although this can be good in some ways, it also runs the risk of overshadowing the show itself with superfluous and unconfirmed news stories.

Websites and media outlets have taken to the disclosure that popular character Daryl Dixon (played by Normal Reedus) might be gay in the same way that one would expect them to hop onto a breaking news story. This is a good example of the danger of hype about one specific topic becoming a major focal point instead of the show itself. “The Walking Dead” comic book has always openly embraced diverse characters from many backgrounds, so any fans of the series should not be surprised that Robert Kirkman is thinking about injecting this potential new twist on Daryl’s character into the show. However, I think everyone can agree that it makes more sense to wait to see how everything turns out instead of talking about it ad nauseam while it is purely in the rumor mill stage.

In our current culture, it is almost necessary to give people too much information to keep them intrigued, and this can primarily be blamed on the constant influx of entertainment options. Therefore, it is understandable that the creators of “The Walking Dead” feel the need to occasionally leak interesting information, but all of the news about Daryl Dixon’s sexuality is based upon a few vague quotes that seem to indicate that audiences will not even receive an answer for at least another year. In other words, this particular media frenzy is quite frankly ridiculous because there is not even anything to actually talk about yet. By the time this aspect of the character is revealed, most people probably will not even care anymore because the media will have already beaten the topic to death. Although spoilers themselves are not necessarily inherently bad, it is poor form to speculate so heavily about something that is so far in the future.

Looking at This Media Obsession from a Zombie’s Perspective

The zombies in “The Walking Dead” are the title characters, but no news station is running a story about any aspect of their lives. Each zombie that is depicted on the show represents a former human being who had a life filled with hopes, dreams and complications that are similar to those that the living characters are currently experiencing. Although being forced to deal with the zombie apocalypse definitely makes things harder for Daryl and the rest of the crew, the people who have become walkers most certainly have interesting back stories as well. Due to this, it would make perfect sense for the zombies to be jealous of the level of attention that the minutia of each living character’s personality receives.

Even most gore hounds will admit that one of the most compelling aspects of the show is the human drama, but this will become a lot less interesting if every possible minor detail is touted in advance by major and minor news networks around the world. Fans of “The Walking Dead” who want to enjoy a spoiler free viewing experience should stop encouraging the media to reveal too much information in advance. The best way to do this is to avoid visiting articles that are obviously click-bait. Perhaps if enough people take this action we will be able to learn new details about other characters by seeing it for the first time in the show instead of reading about it several months in advance.

Image “Norman Reedus” by Ewen Roberts is licensed under CC BY 2.0; Cropped from original

Previous Are Vampires At The Heart of A Monstrous CDC Conspiracy?
Next Canadian Film Team Attacked by Ghouls (Zombies) in Siberia: Fact or Fiction?