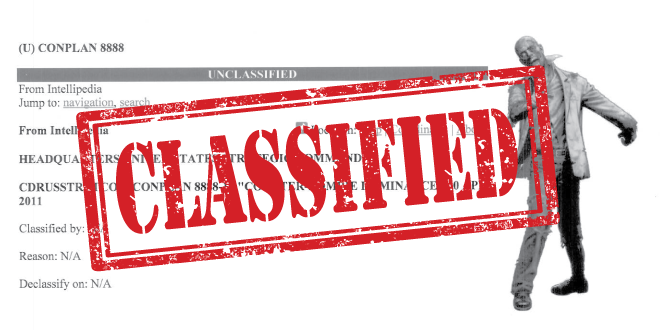 CONPLAN 8888 – How The Government Secretly Prepares For A Zombie Apocalypse

Secretly preparing for a zombie apocalypse by hiding a zombie conspiracy in plain sight is the best way to get people to not believe in the truth. When a massive contingency plan is set forth and put into practice by the military powers of the world, then there’s something more to it than simply a joke telegram. CONPLAN 8888 was written, and was passed off as, a joke military exercise to deal with the “zombie threat” in case such an event may arise. Well, ladies and gentlemen, for me that speaks volumes about the things going on under our noses that the government doesn’t want us to know about. Why make a “training exercise” to deal with the “zombie threat” if there is no such thing? The answer is simple: Because they know there is such a thing, and they are putting these plans into practice before they have to put them into motion.

When I first started trying to read CONPLAN 8888 it was very difficult for the layman to understand. Military abbreviations and jargon was crammed into every sentence of every paragraph. However, the deeper I dug, the more I found that, although they were playing it off as a joke exercise, this held more water than they were leading us to believe. The author of this contingency plan went into great detail about the types of zombies that could arise, the origins from which they come, and he even went so far as explaining the laws… yes, apparently there are legal consequences that may or may not befall you if you kill a zombie. There were also plans outlined for surviving during the initial outbreak, during the height of its existence, and then the rebuilding the world after the zombie threat is eradicated – a complete and self contained zombie survival guide! This should be of great concern to everyone reading this, because the military does not make joke contingency plans just for laughs.

This file has been released to be shared freely with whoever wants to read it, but they reiterate that it is “just for laughs.” Why make a point to tell people it’s just for laughs, when you assume that no one would take it seriously to begin with? To through them for a loop is why. They want everyone to believe they are safe so they’ll continue to go about their daily returns without creating anarchy.  CONPLAN 8888 is not the joke they say it is. When it goes as far as linking POTUS (President of the United States) to the plan, then we all better be worried, because it is in fact a real life exercise. The military is preparing for an apocalypse, and I urge you to wake up and take notice. The proof is usually in the pudding, and in this case, I mean the black and white typed military document know as CONPLAN 8888.