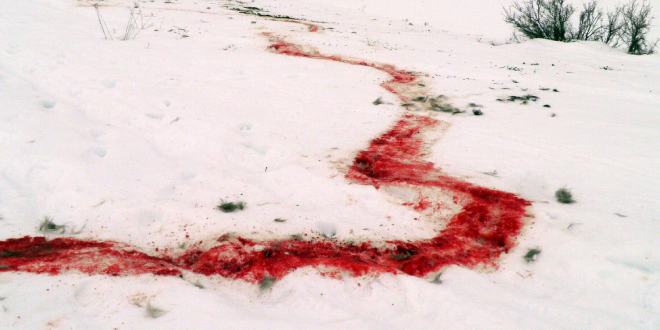 In what may be nothing more than a mock-umentary about zombies, a story is circulating around the web claiming a group of Canadian filmmakers were attacked and several were killed during an expedition to Zabrovst, Siberia in 1998 that has since been covered up by the local authorities and ignored by the wider government.  Jacob Tailor was a filmmaker who had gone to Siberia to photograph the intact corpse of a sabre-tooth tiger that had been found.  He also planned on documenting the nearby body of a man found dressed in 16th century, Cossack clothing.

In preparation for the shoot set to take place in the warmer month of July, part of the team travelled to the site in February.  After photographing the surrounding area, they relocated both corpses to a different site.  Tailor originally planned to use limited footage of the man’s corpse for a small segment of his film; mainly concentrating on the tiger.  However, on July 1st, Tailor and the rest of his teamed returned to Zabrovst only to find no sign of the rest of the crew.

The twelve buildings that made up the site were deserted but there were obvious signs something had gone wrong, something terrible. Everything was smashed and covered with blood.  While investigating the buildings, Tailor and his team heard screams and rushed back to where their helicopter and its pilots were waiting.

The sight that greeted them was a phenomenal shock; the pilots were being torn apart by several dozen figures which appeared to be the missing crew and people dressed like villagers.  Tailor and the others had no idea what was going on but ran for their lives towards a nearby farm building.  Instead of trying to board up windows, they sought shelter on the second floor and destroyed one of the staircases.  They were in the process of destroying the second one, when the ghouls arrived.  Using doors from the rooms to form a ramp which the ghouls seemed unable to crawl up, they held off the creatures for two days, working in shifts sleeping when they weren’t holding back the assault.

Their method of beating their foe came about by accident; Tailor was beating back a ghoul with a broom handle that snapped and stabbed the creature in the eye.  It fell back and didn’t rise again.  The men then began to use anything they could transform into stakes to battle off the creatures and after seven hours of intensive battle, they had killed all the ghouls and could escape.

When they reached Zabrovst, they were met with disbelief and the Russian government refused to start an investigation into the deaths of some foreigners and a few locals.  During the attack, Tailor had left his cameras running and the footage he had taken was presented.  However, a range of so-called experts all classified the footage as a fake and Tailor was ruined as a filmmaker. Also, after doing some searching, the actual footage is nowhere to be found further suggesting this story is either an urban legend or someone having some fun. Therefore, this story has been placed in the Pub as entertainment reading.

If true, though, the question remains; what started the attack?  Could it be that the corpse of the 16th century Cossack held some form of deadly infection that, when thawed some, infected the team and the locals working with them?  If so, then what happened to the corpse?  And were there any more infected locals still in the area?  These questions may remain unanswered due to the authorities’ denial of the events and cover up of the deaths.

What do you think; fact or fiction? Have a link to the footage you care to share?

Image “Nature lends such evil dreams” by V. H. Hammer is licensed under CC BY 2.0; cropped from original

Previous Why the Walking Dead Zombies Feel Left Out
Next Zombie Apocalypse Quiz: Which Weapons Would Suck During A Zombie Attack?