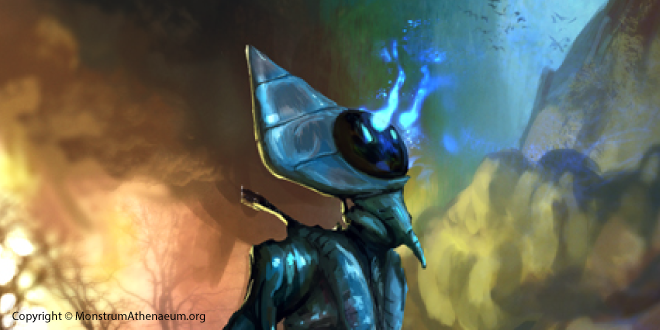 The eyewitnesses described the Flatwoods Monster as grotesque, with a peculiarly shaped head that looked like the ace of spades. In the middle of the head, was an entirely dark, circular shaped window save for two pale, blue beams of light that emanated from it.

Flatwoods, West Virginia, was a relatively unknown and obscure small town, home to just a few hundred people. Well, it was until a stunning incident occurred on September 12th, 1952 which forever changed the lives of those who lived there.

The sudden appearance of an unusual looking object, flying through the sky, caught the attention of the town’s residents. The mysterious object descended a short distance from the town and some brave souls set out to investigate. What they reportedly found has led to a serious debate about the existence of aliens for more than 60 years and has made their town famous as the home of the Flatwoods Monster.

Observers who saw the object travel across the sky described it as a pulsating, red sphere that briefly floated around a nearby hill before either landing or crashing. The bright, glowing light emanating from the landing site was visible miles away and attracted the attention of many people in the area who converged on the location.

According to the story, these curious investigators closed ranks and formed a single group as they approached the pulsating light. A dog, perhaps a little less cautious than its human counterparts, sprang out of the group and ran into the light. After a moment of intense barking, the dog returned to the group, tail between its legs. A foul mist then filled the air, bringing tears to the everyone’s eyes.

Still curious and determined to get a better look, the group pressed on until they saw, what many later described as, a huge ball of fire as large as a house.

According to the reports, a woman was first to notice small blue lights to the left of the fire. She encouraged one of the young boys in the group to shine his flashlight in that direction. They could never have imagined what that beam would reveal but immediately, they were cognizant an alien creature was in their presence, observing them. At least one of the boys fainted from fright, and the rest of the group dragged him along with them as they furiously ran away.

Within thirty minutes, a local reporter was on the scene, attempting to interview the witnesses but, to his surprise, many were too frightened to speak. Although it wasn’t clear whether he believed the fantastical story, he did indicate their reactions made it clear something terrifying had occurred. A subsequent investigation of the scene did, arguably, turn up some physical evidence conceivably linking the object to an extraterrestrial spacecraft and alien visitor.

Unlike other potential sightings where inconsistencies with witness statements undermined the credibility of the event, in this case, the reporter received virtual identical stories.  Perhaps the uniformity in descriptions is one of the reasons the story of the Flatwoods Monster is still so intriguing after all of these years.

The eyewitnesses described the creature as grotesque, with a peculiarly shaped head that looked like the ace of spades. In the middle of the head, was an entirely dark, circular shaped window save for two pale, blue beams of light that emanated from it. By all accounts, it was at least seven feet tall. Interestingly, none of the witnesses could recall seeing anything vaguely resembled legs or arms.

When they first spotted the creature, it began moving or rather gliding toward the crowd. Fortunately for the terrified group, it changed direction quickly and returned towards the glowing sphere.

Suggesting the encounter was not an isolated event, there are at least three similar reports indicating the Flatwoods Monster was in the area for a minimum of one week.

The first account took place seven days prior and involved a young woman and her mother. Both women reported a scary encounter with a similar looking creature that they claimed smelled horrible. The ordeal was so frightening that the younger woman needed hospitalization.

A bit less dramatic than coming face to face with a possible alien, the second account came from two local residents who claimed to have seen a bright orange ball in the sky prior to September 12th.

Finally, just the night before September 12th, a couple also claims to have seen the Flatwoods Monster. According to their account, an unknown figure approximately ten feet tall and emanating a foul smell began to approach their car after it stalled on the road side. Suddenly, it turned away from them and moved into the woods. A few moments later, the couple was shocked to see a pulsating, luminous sphere rise out of the tree line and ascend high into the sky.

As for the physical evidence, the sighting location contained skid marks, oily residue and an area of matted grass that appeared to have been trampled down by a large object.

Perhaps even more intriguing, the majority of the witnesses who were in proximity to the creature on September 12th became ill for an extended period. Their symptoms were attributed to the strange mist surrounding the creature and predominately included throat swelling and nose irritation. The young boy who fainted also suffered from convulsions and vomiting, his throat problems persisted for several weeks. Their treating doctor said the symptoms were consistent with exposure to mustard gas.

So how has the town of Flatwoods adjusted to their possible brush with extraterrestrial life? Obviously very well! So well, in fact, one name wasn’t enough. In addition to the Flatwoods Monster, the town has three other names for their guest: The Green Monster, the Braxton County Monster and the Phantom of Flatwoods.

They hold a yearly festival honoring the Green Monster that includes three days of live music, trips to the area where the creature was spotted and a viewing of artifacts at the Green Monster Museum. Yes, they have a museum!

Outside of Flatwoods, the creature has gained a bit of pop culture notoriety. There are at least six video games utilizing the story of the Flatwoods Monster for game content. For example, in the game, “Amagon,” released in 1988, the final boss is the Flatwoods Monster. The games  “Wild Arms,” “The Legend of Zelda: Majora’s Mask,” “The Wonderful 101,” “Tumblepop” and “Space Harrier II” all reference the 1952 sighting.

As you can imagine, there have been more than a few books and videos made about this topic. Recently, in 2010, the TV show “MonsterQuest” discussed the incident but for some odd reason changed the creature’s name to the Lizard Monster.

What we do know for certain is the U.S. government quickly dispatched personnel to Flatwoods to gather information about the sightings. This level of “official interest” in a potential alien sighting witnessed by a small number of people suggests perhaps the government was well aware UFOs were active in the vicinity of Flatwoods.

Flatwoods, West Virginia, was a relatively unknown and obscure small town, home to just a few hundred people. Well, it was until a stunning incident occurred on September 12th, 1952 which forever changed the lives of those who lived there. The sudden appearance of an unusual looking object, flying through the sky, caught the attention of the town's residents. The mysterious object descended a short distance from the town and some brave souls set out to investigate. What they reportedly found has led to a serious debate about the existence of aliens for more than 60 years and has made…
The Flatwoods Monster
The Flatwoods Monster
The Librarian

Previous Want 100% Proof of Bigfoot? This Researcher Claims To Have It.
Next On The Trail Of The Yahoo