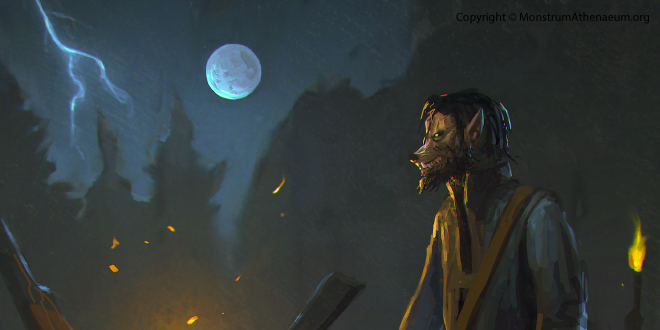 This particularly nasty werewolf, known as the Morbach Monster, is worth mentioning because of its notorious origin and rather contemporary escapades.

The Morbach Monster: The Sometimes Brutal Origin Of Werewolves

There’s a lycan whose allegedly been running around the Wittlich Area of Germany since the early 1810s. This particularly nasty werewolf, known as the Morbach Monster, is worth mentioning because of its notorious origin and rather contemporary sighting.

The legend of the Morbach Monster begins with a soldier named Thomas Johannes Baptist Schwytzer, who had a unique military career. He served in Napolean’s Grande Armee during the commander’s failed attempt to conquer Russia. Schwytzer was there when the Russians abandoned Moscow in 1812 and set fire to the city, ultimately destroying three-quarters of it.  Decimated by battle, disease and starvation, Napolean’s army was effectively in ruin. Sensing defeat and fearing for his life, Schwytzer deserted Napolean and fled back to his home in Alsace.

Schwytzer fell in with a group of Russian deserters who joined him on his journey back to France. Roughly 160 miles north of Alsace, the group came upon the rural German village of Wittlich. Desperately in need of supplies, the men raided a farmhouse and, tragically, murdered the family of farmers. According to the legend, the farmer’s wife, who helplessly watched the slaughter of her husband and sons, placed the following curse on Schwytzer:

‘From now on, at each full moon, you will change into a rapid wolf!’ she cried.

Infuriated by her scorn, Schwytzer crushed the woman’s skull but it was too late. His ill-fated attempt to avoid the curse failed.

Slowly, Schwytzer began to change; the extent of his depravity became harsher and crueler.  Whether it was the horrors witnessed during the French invasion of Russia, his shameful journey home or the curse itself,  Schwytzer embraced the brutality of robbing, raping and murdering. His appetite for debauchery and blood lust was too much for his fellow deserters, and he left them, falling in with bandits and highwaymen.  But even they soon found his methods extreme, so he abandoned civilization and took up camp in the woods.

Shortly after his self-exile, whispered tales of a wolf that walked like a man spread amongst the villagers.  Then the killings began; the mysterious wolf was blamed for the brutal slaughter of people and livestock.  While Schwytzer was suspected to be behind the murders, there was little evidence to connect him with the crimes. That is until Schwytzer raped a young woman, Elizabeth Beierle.

Days later, as Schwytzer sat at his campfire, a group of villagers confronted him and demanded he pay for his crimes.  Schwytzer fled but was pursued and cornered near the village of Morbach, just 40 miles south-east of Wittlich. Apparently taking the curse seriously, the vigilantes killed Schwytzer and buried his body. To prevent the return of the werewolf, a shrine with a candle was placed at the grave site. Legend says as long as the candle is kept burning, the creature shall be bound to the grave.

Nine months after Schwytzer’s death, Beierle gave birth to a son. To her relief, the child showed no sign of the curse and his descendants are said to live still in the area.

Schwytzer’s story didn’t end with his death. One summer night in 1988, a group of Air Force personnel were returning to the Morbach U.S. Air Force munitions depot and passed by the shrine.  Noticing the candle had gone out, they mocked the superstitious locals and joked that the werewolf would be on the prowl.

Later that evening, base sirens pierced the night. Someone or something had activated the perimeter sensors. One of the guards investigating the intrusion reported seeing a large wolf-like creature standing on its hind legs.  The guard said it held his gaze for a moment before running off and effortlessly leaping over a three-meter high fence.

Base personnel attempted to track the creature, but their tracking dog refused to follow the scent. This reluctance to pursue wouldn’t be something unexpected when dealing with shapeshifters. After all, dogs are said to refuse to venture where werewolves have been; their sense of smell is offended by a creature that is neither man nor beast.