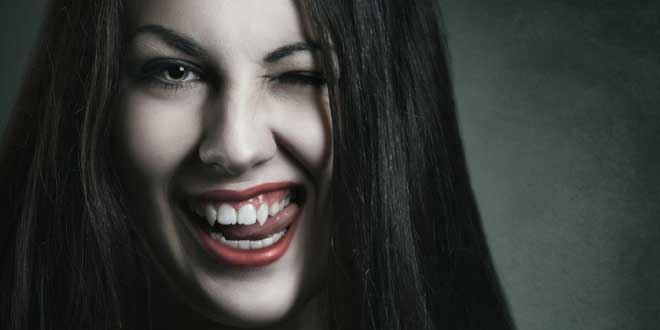 Lately, I’ve received quite a few requests from readers wanting to know if I knew how they could become a vampire. Unfortunately, I’m not the best person to ask since I’ve never actively attempted to become one of these creatures and I tend to discourage cryptanthropy as a casual endeavor. However, in my studies at Miskatonic University I became friends with a rather uniquely brilliant man named Sebastian Bridgewater who was devout in studying this topic. Sebastian is aware of my work here at Monstrum Athenaeum and I reached out to him to see if he’d be interested in sharing what he learned with our readers. He graciously accepted my offer and I’m quite pleased to present you with Sebastian’s top ten list of ways he learned how to become a vampire.

Top 10 Ways I Learned How to Become a Vampire

My name is Sebastian Bridgewater, and as someone who has lived a life seemingly in the background, I must say this final indignity I have suffered is almost too much to endure. You see, I have been sickly and weak since the day I was born and doomed to go through all my life a weakling. I seemed to have always suffered from one illness or another and could never play with the other children as I so desperately wanted to. Mother always made such a big fuss over me, also, making the situation worse as the other boys teased me mercilessly after they saw it.

As I grew older I became resigned to the fact that I would never be strong enough to take on any physical challenges, much less emotionally capable of maintaining any type of lasting relationship. How I would have longed to have met someone to fall in love with, and they would love me back. Others don’t understand the wonderful life they live, and many throw this precious gift away. When I became a young man, I moved to the neighboring city of Arkham, Massachusetts and buried myself in my studies at the university there. I did well, even though I missed the occasional day because of my wretched health. I longed for the day that I could graduate and have some semblance of a normal life.

Then I developed a nagging cough, which later worsened. I visited the doctor, who became concerned when I told him that I had been coughing up copious amounts of blood in my handkerchief. They ran tests on me, and when they were finished, I learned I had an aggressive and rare form of cancer. There was no cure, unfortunately–only milk of the poppy to curb the pain. I was not resigned to go into that gentle unknown of death and began feverishly looking for ways to prolong my life–even if it meant turning to the occult to get my way. As I began to research the ways that I could accomplish this seemingly impossible task, I came upon a book in the library of Miskatonic University where I was attending school that had the cure I had been dreaming of all along. The passages described the immortal lives of vampires. I must admit the creatures have always intrigued me. Their power and eternal lifespan I envy, so to achieve this forever-young status I compiled a list of ways to turn into a vampire by reading the dark passages contained in the dusty books I found there. I’m sharing my list with you in hopes you may find it as useful as I did and I’ve gone to great pains to point you in the right direction each step of the way.

The absinthe waits so without further delay, here is my top ten list of ways I learned how to become a vampire in real life:

Vampire Amulets & Talismans
For those that aspire to hold irresistible vampiric intensity and seduction, enhanced supernatural capabilities, or supreme strength look into acquiring a vampire amulet or talisman. Skilled vampires can strongly charge each item for you with unique strengths to manifest your wishes through real spiritual vampirism. http://www.vampiremagick.com/wares.html

Spells to become a Vampire
There are various spells to become a vampire and each spell has very specific instructions on when and where the incantation must be invoked. Real vampire spells, when properly cast, can change a mortal into a vampire within minutes. However, different consequences exist for those who change their mind and want to turn back after a spell has been cast. So be sure this spell is something you can abide by or face consequences like sudden death and becoming weak. You may have to search to find an effective spell though; it’s not easy to get your hands on an authentic vampire spell book. http://www.spellsofmagic.com/spells/health_spells/immortality_spells/9958/page.html

Exchange of Vampire Blood
A more intense method would be to exchange blood with a real vampire. It should be noted, a large amount of blood isn’t required as merely a 1/4 teaspoon of blood is a sufficient amount to transform you into a vampire. Contrary to popular belief, it is not necessary to drain someone to death to get their blood to complete the transformation. Essentially it is now understood, when a vampire transforms you into a vampire, the vampire must accept your blood first. The transfer of blood can be taken orally. Next, you must also take the vampire blood orally to finish the process. http://vampirewebsite.net/howgetturnedintovampire.html

Through A Vampire Bite
One of the most prevalent beliefs, having grown so widespread that it has dominated all the other conventional means, of becoming a vampire is being bitten by one. In reality, there are many methods of how to become a vampire without being bitten. Corresponding to different positions, a person can develop into a vampire through blood or biting. This includes being bitten by a vampire and dying or nearly dying. Getting multiple bites from a vampire, and drinking the blood of a vampire after being bitten. http://www.mahalo.com/how-to-become-a-vampire/

Find a Vampire Mentor
There are vampires out there who are looking to mentor individuals who feel the pull of the vampire, but aren’t entirely sure what they are. Mentors can guide you through your  “awakening” while learning and developing your own abilities. It is important to make connections with local vampire communities, wherever you are. There exists an entity of living energy all around us and in the universe. A vampire is an adept at power play and tapping into this living energy for self-benefit. A vampire mentor can help you take what energy you want and need and learn to use it for your own purposes. http://monstrumathenaeum.org/top-10-places-might-find-a-vampire/

Read a Vampire Book
A study has found when you fully experience a story, like reading a book about vampires; you psychologically become part of the group described within the tale. This process is called Narrative-Collective-Assimilation. Additionally, researchers have found that those participants who managed to match their support needs through joining groups were more likely to have stronger associations as either wizards or vampires. http://keenetrial.com/blog/2011/08/17/can-reading-a-story-make-you-a-vampire/

Various Actions
There is a belief by some that certain random acts committed by a person will transform them into a vampire. These acts include eating the flesh of an animal which was accidentally killed and not properly slaughtered, eating a sheep (or other animals) killed by a wolf, leading an immoral life (prostitutes, thieves, murderers…etc.), saying a mass while in a state of sin, and stealing the ropes used to bury a corpse. http://www.vampires.com/the-many-ways-to-be-a-vampire/

Circumstances Surrounding Your Birth Increase Your Chances of Becoming a Vampire
There are certain characteristics surrounding your birth which can help you become a vampire. Examples of these include being born at certain times of the year (like a new moon or a holy day), born with a red caul, with teeth, with a red birthmark, with extra hair, with two hearts, weaned too early or born the seventh son of a seventh son. For good measure, if a vampire stared at the mother while she was pregnant, had a curse cast on her (or the child), or the mother did not eat enough salt during pregnancy, then the child may be more prone to vampirism. http://www.vampires.com/the-many-ways-to-be-a-vampire/

Follow a Recipe
Your mileage may vary but be open to trying processes that have reportedly worked for other’s. You may have to search a while before you find one that works but I’ve provided you with a recipe to get you started. http://life-as-a-real-vampire-123.blogspot.com/2011/05/how-to-turn-into-vampire.html

Cast a Spell with an Element of Darkness
As a variation on spells to become  a vampire, there are incantations involving blood, a badge and an element of darkness which are not for the faint of heart. Once you’ve collected all three objects, you’d injure yourself with the badge and let the wound bleed out. In order for the spell to be effective, you must think thoughts associated with the creature you wish to become. The transformation is reported to occur within a few days but actually feeling some difference can take a while. http://www.spellsofmagic.com/spells/health_spells/immortality_spells/11479/page.html

While some of these methods to become a vampire seem easier than others, the motivation is still the same. If you’re as envious of those that have become immortals as I was then I encourage you to take this as a first step in searching for your answers. I caution you, though, there must be a transformation of the mind and the hardening of one’s soul before embarking on this journey. It is for this reason I cannot share the intimate details of my studies for fear of the pain and suffering it may cause but I did leave you with enough bread crumbs to follow; I wish you the best.

Previous Are Mermaids Real? The Story of The Fisherman and The Siren
Next The Fouke Monster and The Legend of Boggy Creek