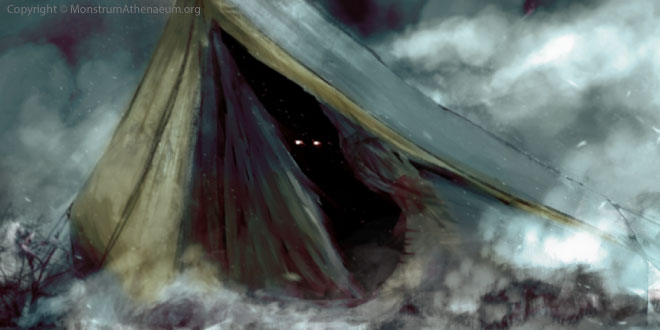 Two weeks after the group failed to reappear, a pilot on the rescue mission spotted the remains of the teams’ campsite: a lone tent exposed on the side of Dyatlov Pass.

There are many theories and conspiracies about what happened at Dyatlov Pass. One more seems like a waste of good speculation yet don’t let that keep you from reading on. What you learn here may scare you but it will be well worth the time.

Dyatlov Pass, nestled in the Ororton Mountain Range of the Ural Mountains was just a number on the map, peak number 1079, to the team of spirited thrill seekers led by Igor Dyatlov on January 28th, 1959.  Unknown to them at the time, they had what would prove to be their last great adventure because a disaster struck, so heinous in nature, that the mountain was named after the team’s leader. Today when people talk about what happened on that cold and cloudy mountain, they ominously call it  “The Dyatlov Pass Incident.”

To the indigenous people of that area, the Mansi Tribesman, that peak has a different name.  They call it “Kholat Sykhl” which translates to “Mountain of the dead.”  The Mansi tradition contains several histories, stories and legends about this peak. The most relevant history occurred a few years before Dyatlov lead his team up the mountain when nine tribesmen were killed on the same pass, under similarly cloudy circumstances.

The original team had ten members but Yuri Yuden came down with a bug and stayed at the last station on the way to the mountain range, at a settlement called Vizhai. The nine remaining adventurers tramped off into the proverbial sunset without Yuden. February 11th was the day they were supposed to check in, and when they did not return to Vizhai station, no one was immediately concerned or particularly surprised.  Such a trek was dangerous, after all, and the experienced outdoors men and women were simply taking their time; or so it was assumed.  When another week passed with no word, friends and family started to get worried.  A search was organized and within days, the groups’ last campsite was found.

This is where everything goes sideways…

Two weeks after the group failed to reappear, a pilot on the rescue mission spotted the remains of the teams’ campsite: a lone tent exposed on the side of Peak 1079.

Upon investigation, the discovery was made that the tent was cut or ripped from the inside, clothes and shoes littered the area and there were footprints fanning out in every direction. The closest body found was the nude corpse of Rustem Slobodin, one of the engineers.  Medical examiners concluded that he died of hypothermia, regardless of seven inches of fractured skull!

Dyatlov himself was found further down the slope, also naked and frozen in a position of abject terror, flat on his back with one hand gripping a sapling and the other arm covering his head as if to ward off an attack that never came.

Near a large pine, more than 1500 feet from tent, were the naked bodies of the student, Yuri Doroshenko,  and the engineer, Geogyi Krivonischenko.  These two died of hypothermia but there were signs of horror here as well.  The lower branches of the tree were broken as far as 15 feet up and there was blood found on the bark which was later determined to be from the hands of the two corpses on the ground.  More intriguing still was the remains of a fire found next to the bodies.

Furthest away from this group of bodies was the naked body of another student, Zinaida Kolmogorova.  There was blood found near her body, but the rescuers mentioned that they were surprised that there were no other signs of a struggle.

The four remaining members of the party were found months later, after the spring thaw. They were more than 1700 feet from the tent, buried under 12 ft of ice and snow.   All of them were somewhat dressed.  All of them sustained horrible injuries.

Nicolas Thibeaux-Brignollel, one of the engineers, was the first one of this group to die. He had a skull fracture similar to Slobodin. The official record says that he died from “internal injuries.”

Lyudmila Dubinina, a student, was the next to die.  Hers was probably the most gruesome death of all.  Her tongue was ripped out and her chest was completely crushed. The official report said  she died from “internal injuries.”

Another student, Alexander Kolevatov, died around the same time as Dubinina. From the same mysterious “internal injuries.”

The ski instructor,  Alexander Zolotarev, was the last to succumb to death.  His body was found wearing Dubinina’s hat and coat. Similar to the others, the official report says he died from hypothermia and “internal injuries.”

It’s surprising everyone in this group died from “internal injuries,” yet investigators never found anything indicating how they received them. They couldn’t have done it to themselves.  In fact, experts agree that a human being is not capable of striking hard enough to crush ribs in this fashion, or yanking out a tongue without some sort of assistance.

There is a lot of speculation about what happened on that mountainside and much of the evidence has conveniently gone missing. You can find many of the facts and a recap of some of the better theories in the article, “Mountain of the Dead: The Dyatlov Pass Incident.”  The well-publicized theories include yetis, aliens and even a Mansi warrior massacre.  Each of these theories, while creative, is easily debunked by experts.  If it smells like a conspiracy and looks like a cover up, the smart man looks for the story nobody is talking about.

So what is the story no one is telling?  Whispers among the Mansi tell a different sort of tale.  The Mansi legend tells of a “Wild Man” of the mountains.  Scholars have tried to link this legend to the common Yeti with little success (no giant foot prints for one thing).  The Mansi Wild Man is something else entirely.  He is a territorial hermit with a well-known blood lust. He is a large, imposing man and he is very, very old.

He is a vampire.

Yes, you read that right; evidence indicates that the killer in the Dyatlov Pass incident is an ancient vampire; probably one of the oldest in the known world. Knowing this, many of the clues the deceased left behind fall into place.

Remember the campfire by the pine tree?  Investigators thought that Doroshenko and Krivonischenko started the fire for warmth. However, they were naked and there were no supplies found when their corpses were discovered.  So how could these two start a fire? They couldn’t! The fire was a lure left by the Mansi Wild Man.  It also explains why the experienced party camped on such an exposed site instead of a more sheltered area nearby.  When the travelers happened upon the vampire and his fire, he persuaded them to camp in this spot instead.

The vampire also convinced them to allow him to spend the night in their tent.  At this point, he seduced them as is the habit of his kind. This explains why most of the party was in varying states of undress probably turning in for the night when all hell broke loose.

However, he was out of practice; living out there in the Ural Mountains all alone. Nine people were a lot to keep track of.  While he was distractedly participating in some debauchery, half the people in the tent came out of their stupor and realized the depravity of their situation.  The vampire and his mesmerized meal were in the front of the tent, so the other five people, naked and very afraid, ripped the walls of the tent in a desperate attempt to escape.

The Wild Man caught up with Slobidin first. In his hurry, he bashed him in the head, and then moved on in pursuit of the others.  He followed the Kolmogorova woman and toyed with her before draining her. Bits of blood dripped around the corpse.  The tooth holes and the lack of blood in the corpse were probably overlooked by the Soviets.  This explains why there is no record of injuries or the official cause of her death, but only the remarks of the men that found her, stating that they were surprised that she did not struggle.

While he was dispatching Kolmogorova, the remaining adventurers in the tent grabbed what clothing they could and dressed in the below freezing weather as they ran.

The Wild Man, refreshed after his repast, gave chase to his new prey and caught up to them as they attempted to navigate a ravine in the dark. With a renewed blood lust, he swiftly took care of Thibeaux-Brignollel and brought the others under his sensual spell.  He must have loved the sound of Dubinina’s terror, as her tongueless face was found in a mask of a perpetual scream. He took his time killing them. According to forensic evidence (undigested food in their stomachs) it took hours for them all to die. Brutal and cruel were his actions in that ravine.

By the time he got back to the mountain side, the other three had died of hypothermia, their terror evident on their frozen corpses. Even if they could not see what was going on, they certainly heard the death throes of their comrades.  Doroshenko and Krivonischenko were huddled together, and Dyatlov was all alone; silently waiting in fear for his turn to die.

So, now you know the story the Soviet Union didn’t tell about peak 1079; the whispers of the people who have lived in the shadow of the Ural mountains for centuries past: A people who have lost loved ones to the same monster; the story of the ancient vampire of the mountains, the Mansi Wild Man.

There are many theories and conspiracies about what happened at Dyatlov Pass. One more seems like a waste of good speculation yet don’t let that keep you from reading on. What you learn here may scare you but it will be well worth the time. Dyatlov Pass, nestled in the Ororton Mountain Range of the Ural Mountains was just a number on the map, peak number 1079, to the team of spirited thrill seekers led by Igor Dyatlov on January 28th, 1959.  Unknown to them at the time, they had what would prove to be their last great adventure because a…
The Dyatlov Pass Incident: Unhappy Anniversary
The Dyatlov Pass Incident: Unhappy Anniversary
Argus

Previous Were Two Hikers Stalked By Bigfoot During An Outing In Tennessee?
Next The Vampire of Highgate Cemetery