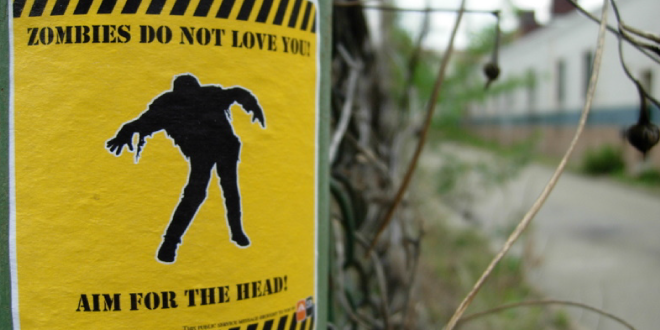 The Centers for Disease Control and Prevention (CDC) appear to be completely fascinated with vampires and zombies.

Are Vampires At The Heart of A Monstrous CDC Conspiracy?

The Centers for Disease Control and Prevention (CDC) appear to be completely fascinated with vampires and zombies. After all, they have published a zombie preparedness guide, and they also have a feature article about vampire nutrition. These two things are presented as humorous examples of how people can protect themselves and live a healthier lifestyle, but it is beginning to look like there might be something more to this trend. In fact, it does not take much of a stretch to conclude the CDC is either run by vampires or has been actively experimenting on monsters for a number of years. Either way, this provides some evidence creatures that go bump in the night are actually real.

What Does the CDC Say About Vampires?

The most likely reason it seems monsters existing on a diet of human blood actually exist, behind the respectable cover of the CDC, is the fact the CDC has released a four-step guide to eating the right diet to become a healthy vampire. The fact this was not published during the month of October to capitalize on the Halloween hype makes it look even more suspect. It seems fair to speculate this so-called vampire diet is actually the best way for humans to improve the quality of their blood. In other words, making sure you get a lot of A and B vitamins will make you a more delicious meal, and also raise your iron and iodine levels.

How do Zombies Factor In?

Interestingly, as we’ve discussed before in The Government’s Zombie Apocalypse Survival Guide, the information published by the CDC about zombies takes a very strong survival slant. In fact, they have an entire preparedness area of their website teaching people what to do in the event of a zombie apocalypse. The first important lesson to take from this preparedness guide is quite simply the fact it exists at all. Although the CDC claims that they are being tongue-in-cheek, this doesn’t hold up to scrutiny when you consider the fact government agencies are not usually given approval to waste time and money on something which is only a joke. Therefore, this means that we can infer that the CDC is aware that zombies actually exist or could soon come into existence; hinting at an overwhelming government conspiracy regarding monsters.

Are Vampires in Control at the CDC?

When we examine the evidence at hand, it seems astonishingly likely someone working higher up within the CDC is actually a cryptid; perhaps of the vampire variety. After all, why else would they be so concerned about the exact diet that would make people become healthy night stalkers?

What about the zombie preparedness advice? An outbreak of the zombie apocalypse would rob vampires of a large percentage of their food source so it would be in their best interest to warn humans and give them the tools to defend themselves.

Why Would a Vampire Risk Exposure?

Although anyone looking closely at all of this information could come to the same conclusion reached here, most people would never allow themselves to believe in something that seems so fantastical. Combining this aspect of human nature with the extreme popularity of vampires and zombies makes it easy to understand that publishing this information right now is not really risky at all. Instead, it provides the perfect cover for the vampire to publicly distribute this information through a credible outlet in the guise of joke. As an added bonus, vampire enthusiasts deciding to take up the vampire healthy diet will provide an even more delicious dining experience for the undead.

We will be keeping a close eye on the CDC’s website for any further evidence that things are not exactly as they seem. In the meantime, you might want to brush up on your zombie preparedness knowledge so that you will be ready to protect yourself in the event that the apocalypse happens in the near future.

Image “How to Survive a Zombie Attack” by Todd Hryck is licensed under CC BY 2.0; Cropped from original