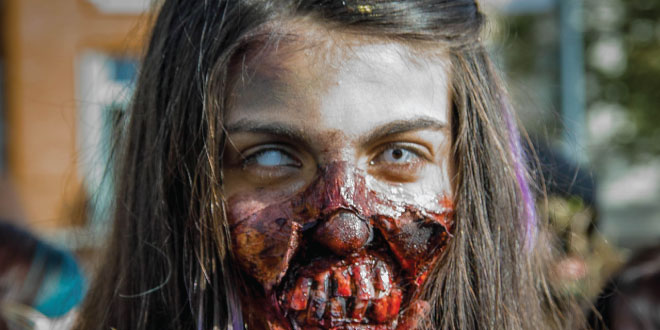 We build up to a full scale simulation of an outbreak in the United States, and discover that for `realistic' parameters, we are largely doomed. - Abstract: S48.00008 : The Statistical Mechanics of Zombies

Science Has Once Again Saved Us From The Zombie Apocalypse (Well..Some Of Us)

For years, zombie enthusiasts have debated over the best places to hide when the undead begin walking the earth. Nowadays, given the fixation of zombie lore in our popular culture, spirited arguments over bug-out locations are seemingly unavoidable – online forums, the workplace water cooler, or just about any place two or more emergency preppers rub shoulders. However, none of these discussions were backed by any scientific data. That is, until now.

Have you often thought the best place to hide during a zombie apocalypse is a remote location in the woods? If your hand is in the air, it turns out you’re definitely on the right track. Researchers from Cornell University have been studying the potential theoretical impact of zombies as a method for learning how all infectious diseases travel throughout the world. Their findings shouldn’t come as a surprise to horror buffs: get as far away from other people as possible! However, wandering off into the closest wooded setting without a plan might make matters worse. Instead, you should set your sights on a remote location, with a high elevation, such as Glacial National Park.

We present results and analysis from a large scale exact stochastic dynamical simulation of a zombie outbreak. Zombies have attracted some attention lately as a novel and interesting twist on classic disease models. While most of the initial investigations have focused on the continuous, fully mixed dynamics of a differential equation model, we have explored stochastic, discrete simulations on lattices. We explore some of the basic statistical mechanical properties of the zombie model, including its phase diagram and critical exponents. We report on several variant models, including both homogeneous and inhomogeneous lattices, as well as allowing diffusive motion of infected hosts. We build up to a full scale simulation of an outbreak in the United States, and discover that for `realistic’ parameters, we are largely doomed. – Abstract: S48.00008 : The Statistical Mechanics of Zombies

Why is Glacial National Park the ideal place to ride out a zombie apocalypse?

Current feature films fancy zombies taking over the world at olympic sprint runner speeds. And while there’s some evidence to suggest the rapid spread of a virus could happen in locations with large populations or confined areas such as large cities & islands; a flash-bang outbreak isn’t consistent with how diseases spread in remote locations. Ultimately, whether or not you survive, according to the study, boils down to how many people are around you when folks first begin to reanimate, hungering for grey matter. Your potential risk of exposure essentially drops in a smaller area, reducing the chance you’ll become infected and transmit the disease yourself.

How will a zombie virus spread?

Statistically speaking, the spread of a zombie virus is purely a numbers game and it’s best to know your odds. When the first zombie, let’s say zombie zero, bites someone else, there will be a 100 percent increase in the zombie population. Now, assuming each of these zombies is a mindless eating machine, capable of chomping down the next victim within 15 minutes, it‘s possible each single zombie could dine on a maximum of 96 people per day. According to the researchers, the chain reaction caused by zombie zero could produce more than 9,200 zombies during the first 24 hours. By the end of day two, this number could be as high as almost 885,000 but would only be possible if the population was available to support the infection.

In highly populated areas such as New York City, Los Angeles and Chicago, the undead would obliterate the population in just a matter of days. In smaller towns, though, it’s a different story. Unless everyone is already infected with the zombie virus as they are in “The Walking Dead,” an infected individual must be introduced into the town before the virus can begin to spread. This means a vector, someone who is carrying the virus, would have to travel to the remote location and start chowing down. The researchers don’t consider this a quick process because a zombie would have to travel from a big city, shuffling all the way to the country, in search of new food. Will it happen though? The answer is almost certainly “Yes!”, but it would take a lot of time, allowing survivors to prepare for this eventuality.

How should you deal with a zombie outbreak?

Understanding that the spread rate of a zombie virus is likely to occur slowly in rural areas, it becomes even more important to have your bug-out bag prepared. You should also pay close attention to news reports for any unusual activity indicating the zombie apocalypse has begun. After all, if you wait too long to get out of town, your odds of becoming infected are going to go through the roof and you’ll be stuck on yours wishing you’d gotten out sooner. Getting to the woods is a great plan, but it is important not to stay too close to whichever city you escaped from.

What is the best alternative?

Great, now there’s an official report telling everyone to seek refuge in the Glacial National Park which means it’s no longer an ideal hiding spot so it’s important to have alternative options in mind. There are many zombie writers and experts who believe the undead are less of a threat during the winter because their bodies freeze to the ground. While this theory can’t be proven, it does make sense. Without the benefit of generating their own body heat and lacking the necessary survival instincts to find a shelter, these cold blooded monsters should freeze solid in subzero temperatures. In other words, cold climate areas could be a great resource for surviving the apocalypse, but only if you are able to keep yourself warm and well-fed throughout the winter.

Are there any zombie-proof structures?

Another alternative is the so-called zombie-proof cabin. The developer of this product, Tiger Log Cabins, even offers a 10 year guarantee you’ll remain safe from zombies as long as you are inside the cabin, but it seems unlikely that there would be anyone around to hear your complaints if the cabin fails to live up to its advertising.

Another zombie-proof house design resembles something the government would use to keep high ranking officials safe. This stunningly gorgeous and modern home, lined with windows, can become a virtual fortress at the touch of a button. Something like this appears to be well-poised to keep the zombies out but would it end up as nothing more than a fancy tomb after trapping you inside?

With all of these questions, it seems wisest to head as far away from the major cities as possible. If you cannot make it as far as the Glacial National Park, then perhaps you should take a tip from “The Walking Dead” and head out to the remote areas of Nebraska.

While you’re putting together your bug-out bag and planning your escape route, you might want to consider leaving these weapons behind as they’ll probably do more damage to you than your zombie foe.

Image “Zombie Day Toulouse 2014” by Jamie  is licensed under CC BY 2.0; Cropped from original.

Previous The Order: 1886 – Tesla & Knights of The Round Table Battle Werewolves
Next One Seriously Haunted Hotel