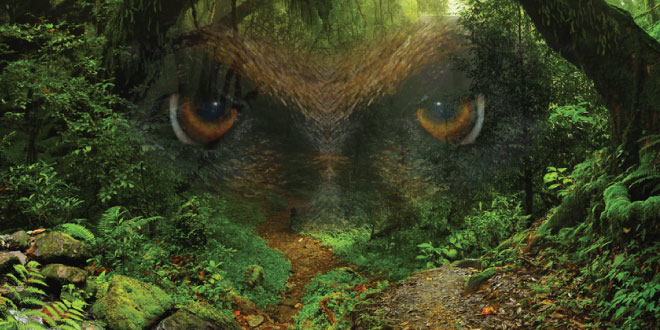 The pair were never sure if they were stalked by Bigfoot that night in the woods but something did follow them for several miles, throwing sticks and rocks.

Were Two Hikers Stalked By Bigfoot During An Outing In Tennessee?

Legends of mysterious creatures living in forests and prowling abandoned towns are common to many rural and isolated areas of the country. Most of the time they are simply that; legends. Occasionally, though, a tall tale turns out to be based on something very real which is the case for a blogger called Teebloger who writes of his encounter with a creature in Unicoi County, TN.

According to Teebloger’s account, he was visiting a friend who lives in the mountains near Simerly Creek back in August 1999.  The two set of on a hike through the woods to an abandoned settlement called Clarktown like they’d done many times before.  His friend’s grandfather told them stories of a ‘Wildman’ who lived in the area and had been seen when Clarktown was occupied as well as many times since.  The pair didn’t take him too seriously but were carrying hunting rifles and had their dogs with them so were confident they could deal with anything they encountered.

The two friends spent the day cat fishing and decided to head back when it began to get dark.  About a mile down a logging road from Clarktown the sun set behind the hills and they switched on their flashlights.  Not long after, they heard something rustling in the undergrowth and their dogs began acting nervous.  The sounds of breaking branches and crackling leaves followed them down the road and, as the last of the sunlight faded into blackness, the source of the disturbance became more aggressive until the pair heard a low-pitched growling noise.

Abruptly, they heard the sound of breaking branches no more than 20 yards from their position and realized there was not just one creature but two and these creatures, whatever they were, were surrounding them.  They fired off some shots, suspecting perhaps two black bears were stalking them but the creatures were undeterred by the thundering gunpowder.  As the pair continued down the trail, they saw shadowy figures in the trees and quickly realized – these were not bears.  Rocks and sticks materialized out of the night air landing on the road in front of them. They fired their rifles madly to keep the creatures at bay.  This continued for three hours until they reached the home of one of the men, at which point the dogs fled and hid under the porch.

Teebloger and his friend were never sure what had stalked them in the woods that night and subsequent visits back to sight yielded no direct evidence but they did find deer carcasses suspended in the trees.  The area is now private property (rumoured to have been purchased by an FBI agent) so further examination is impossible.

The incident described in this account is consistent with similar stories of folks stalked by Bigfoot who also reported hurled objects and found animal carcasses. According to the BFRO database, this isn’t the only sighting in Unicoi County.  In November 2011, a man saw a ‘bi-pedal creature’ in the Cherokee National Forest.  While the creature was bathing in a creek, the man was able to creep within 15-20 yards before it spotted him.  When it did, it made a growl described as a cross between a bear and a large canine and the man decided it best to run away – smart choice.

Whether or not it was Bigfoot, it’s still a fascinating read and you can find the complete story at https://teebloger.wordpress.com/2015/01/06/encounter-with-the-unknown/