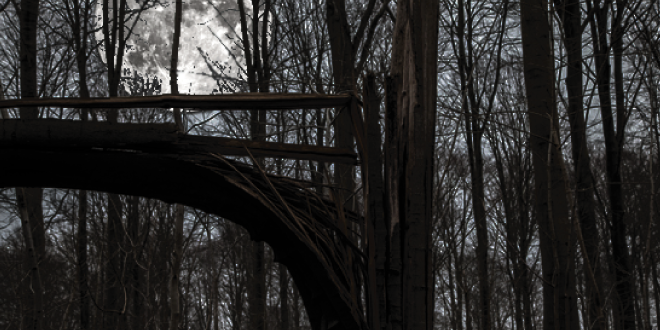 My grandmother said it was Halloween pranksters, but my uncle quickly disagreed. He swore that no human could break the trees in such a way. It took a group of people with 4x4 trucks and logging chains to clear the mess.

When I was 7 years old, back in 1983, I lived with my grandmother and my uncle in the mountains of Virginia. From where the borders of Kentucky, Virginia and Tennessee meet, we were about 60 miles in, but still on the far western side of the state. The old gravel road we lived on only had six houses spaced out on its mile and a half long track, so it was pretty secluded to say the least. Some residences in the area were only accessible via hand cut walking paths, just to give you a general idea of the type of rural area I’m describing. Most of the people there, in that area, were related in some way or another; either by marriage or by blood.

Every gravel road that branched off from the paved road seemed to have a stream which ran from higher up in the foothills down into the much larger creek, in turn feeding into a river. People used to swim and fish in that creek, and I was one of them. We used to dam up certain areas with the large rocks, that lined its banks, in order to make deep swimming holes. When they weren’t being used for swimming, the catfish would always seem to take up residence in those swimming holes; making it an easy afternoon of catching Sunday dinner.

Nights were especially eerie in those mountains, as wild howls and sometimes guttural sounds would echo through the trees. Those trees, a central part of this tale, seemed to engulf the gravel roads which snaked their way into the hills. At night, sometimes I would walk with my uncle down to the only store for miles around to get some ice cream or soda. It was a small country gas station that sat right in front of an old cemetery, right there, next to the creek. Sometimes, during those trips, we could hear strange roars off in the distance. They seemed miles away but that was still too close as far as I was concerned.

The part of this tale I want to highlight occurred Halloween night, in 1983. We had to go out, into the main town, for trick-or-treating because the houses were so sparsely spaced where we lived. The night was fun and much candy was obtained. Upon arriving back to our road, in the mountains, we noticed something quite unusual. The trees that lined the road were broken at about seven feet up. Broken, not cut. The debris of brush and logs littering the road was so immense we couldn’t even get back to our house. We had to stay with relatives a few miles away. My grandmother said it was Halloween pranksters, but my uncle quickly disagreed. He swore that no human could break the trees in such a way. It took a group of people with 4×4 trucks and logging chains to clear the mess.

A few weeks later, after a hard autumn rain, my uncle and I were making an afternoon trip to the store for a soda, when he found a massive foot print in the mud. He told me, as he smashed the print in with his own boot, to never tell about what we had seen. He said that “they” don’t need to be disturbed any further. Up until this day, I have kept that promise. However, my personal account of Sasquatch is a tale that needed to be told, if only to add to the growing collection of actual encounters and eyewitness reports.