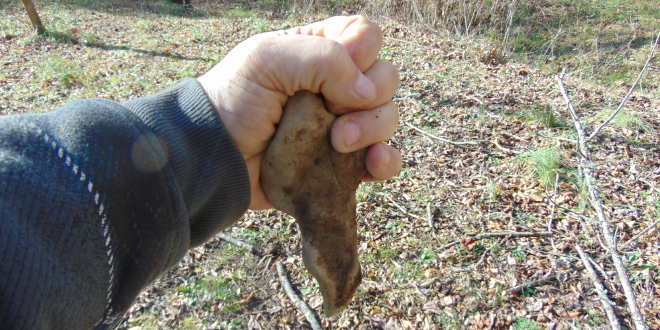 Boutwell and His Tennessee Sasquatch

In our first interview, “Skeptic to Believer,” we learned a lot about the man named John Boutwell and his mysterious neighbor, the Tennessee Sasquatch. Boutwell first contacted Monstrum Athenaeum after discovering he accidently took pictures of what appeared to be a genuine Sasquatch encounter in his yard in Lutrell, Tennessee.

Apparently John’s brush with this cryptid neighbor didn’t stop with a few blurry photos. Recently, he contacted us again to report ongoing activity and shared additional photos of what may very well be evidence of Sasquatch activity near his home.

After his initial encounter, John’s been alert to the possibility something’s lurking just outside his door. Armed with that knowledge, he’s been on the look out for anything unusual, and his vigilance has paid off. John believes he’s found signs of Sasquatch all over his property. Perhaps more worrisome, he’s confident one followed him while hiking nearby on at least one occasion.

To start things off, John put an ear to the wind for anything out of the ordinary and heard noises which he attributes to Sasquatch activity. On more than one occasion, he’s heard various vocalizations such as calls and whistles along with the occasional tree knocks. As John says it, he’s heard “a lot of whoops and hollers late at night”.

John’s interactions weren’t limited to eavesdropping on creatures bellowing in the night. He tried experimenting when they seemed particularly active by clapping his hands together loudly and to his delight, the Sasquatch clapped back!

Not every interaction was as playful, though. John has a small space in his yard that he uses for golf practice. More than once he’s putted a ball into the woods only to have it tossed back to him, and he goes on to tell of the occasional stick being thrown at him as well. Perhaps his guests in the woods slightly misunderstand the rules of the game. After all, he’s swinging a stick himself so is this simply a form of imitation?

You’ve got to hand it to him, most folks would tap out about now but not John, he’s just getting started. In an attempt to better understand the secretive creatures, he decided it was time to use a little ingenuity and elbow grease. Grabbing an American stalwart, duct tape, he set about fixing four jars of peanut butter high up in the surrounding trees, about two-hundred yards from his house.

And the results of his experiment? Two jars were completely removed from their perches and tracks littered the area around the trees. Unfortunately, a carpet of leaves and rain ruined any chances John had of casting high-quality impressions of the prints.

John found many more uncastable tracks around his property and other signs of the Sasquatch passing, such as broken small trees and branches. These tracks, one a whopping seventeen inches long,  were a rare find for any Sasquatch hunter, but the other evidence he discovered excited this new believer.

Some of the broken trees were bent into odd positions.  One looked like a marker of sorts, and another was large enough that it may have been a Sasquatch habitat. The later was a large pile of branches shaped into a structure, the perfect place for a big footed family to bed down.

Nearby, John found large piles of scat and rocks possibly used as tools and for stick drawings in the mud. The dirt pictures appeared as though a child, perhaps a Sasquatch child, had created them.

So what’s John up to now? Well, this experience opened his eyes to the cryptid world and for lack of a better term, he’s hooked. However, John’s been intrigued by the possibility of the supernatural for some time.

According to John, it all started with an old Unsolved Mysteries style television show he saw one night about a woman in New Orleans, Louisiana. She was in a bar drinking and went outside to get some fresh air. A man wearing a long coat approached her, and she quickly fell under the stranger’s seduction. Seemingly, she had no resistance to him, and the two were about to kiss when her friends walked out. The group turned their back on the man and in a split second, he vanished. Later, they discovered marks on the woman’s neck and reported seeing something up on a Church Steeple.

Ever since then, John’s been captivated by vampires and more importantly, ways to slay the bloodsuckers. After researching vampire-killing kits, John started making his own and now sells them on eBay as Halloween props.

John said “I don’t make much on each one but I love making them and I really love when I’m out somewhere and somebody ask what I do, and I show them one of my kits and the looks in their eyes are priceless.” He’s sold hundreds of these kits all over the world and said “most of the go overseas to places like Holland, England, Germany, and lots of different countries. I have gotten lots of good feedback on my kits, and I consider myself a Vampire Killing Kit and prop artist.”

You can check out John’s current 18th-century vampire killing kits on eBay.

In our first interview, “Skeptic to Believer,” we learned a lot about the man named John Boutwell and his mysterious neighbor, the Tennessee Sasquatch. Boutwell first contacted Monstrum Athenaeum after discovering he accidently took pictures of what appeared to be a genuine Sasquatch encounter in his yard in Lutrell, Tennessee. Apparently John's brush with this cryptid neighbor didn't stop with a few blurry photos. Recently, he contacted us again to report ongoing activity and shared additional photos of what may very well be evidence of Sasquatch activity near his home. After his initial encounter, John's been alert to the possibility…
Boutwell and His Tennessee Sasquatch
Boutwell and His Tennessee Sasquatch
The Librarian