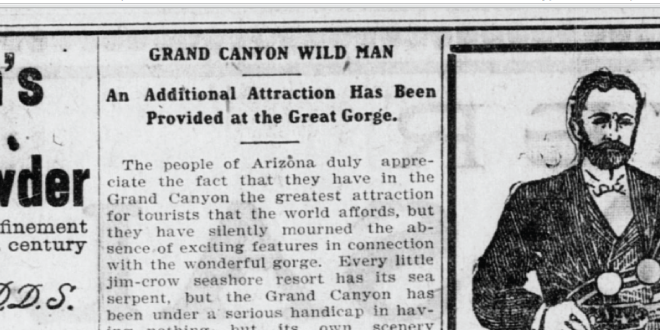 The Mogollon Monster is thought to be a cryptid species of Bigfoot living in the Mogollon Rim area of central and eastern Arizona.  Even though numerous reports have been made which include videos, footprints and even hair samples, main stream biologists still refute the creatures existence.

The general description of the Mogollon Monster is over 7 feet in height, bipedal with large eyes that are sometimes red or sometimes deep sunk.  It is covered with black or reddish brown hair save for the face, hands and feet and is physically very strong.  Other reports also mention a foul smell associated with its presence that has been likened to a dead fish, decaying peat moss, the smell of a snapping turtle or that of a skunk.

Though many reports state the creature to be either non-threatening or neutral when encountering humans, others have seen a vicious side to it, though this may be associated with defending its prey.  It is an omnivore and tends to be nocturnal.  It is attributed with the ability to mimic the sounds of the animals around it, perhaps a hunting technique, as well as making a high pitched scream that is also human and described as ‘like a woman in great distress’.  Its presence is often marked by an eerily silence in the forest which is typical when other animals are avoiding a predator.  Even though it has been seen to decapitate its prey, including animals as large as deer, it’s an opportunistic scavenger; enter camp sites to presumably seek easy food.

Noted cryptozoologist Don Davis reported a sighting of the creature in the mid-1940s near Payson, Arizona when on a Boy Scout trip.  He described the creature as huge with deep set eyes, hairless on its face but with hair on the rest of the body.  It had massive chest, shoulders and arms and the face he described as very square.

Another credible sighting came from a woman named Collette Altaha, a member of the White Mountain Apache Nation in the Arizona.  In 2006, she spoke about the growing number of sightings by her people with the creature.  Other members of the reservation stated that no-one had ever had a frightening encounter with the creature but reported it was very tall and walked with long strides.  Over the years tribal police have received reports of numerous sightings from credible sources.

One of the oldest documented sightings of the creature dates back to the 1903 edition of the Arizona Republican, where I.W. Stevens writes about encountering a creature near the Grand Canyon.  Most internet sources simply summarize Steven’s description of the creature as having long white hair, a matted beard that reached its knees, and wearing no clothing. However, we did some digging at Monstrum Athenaeum and were able to find the original article from the Arizona Republican with Steven’s accounting of the incident.

For your convenience, below is a text version of the article:

An Additional Attraction Has Been Provided at the Great Gorge.

The people of Arizona duly appreciate the fact that they have In the Grand Canyon the greatest attraction for tourists that the world affords, but they have silently mourned the absence of exciting features In connection with the wonderful gorge. Every little jim-crow seashore resort has its sea serpent, but the Grand Canyon has-been under a serious handicap in having nothing but Its own scenery wherewith to thrill visitors. The shortage has been remedied, however. The Canyon has a wild man. We know it harbors a wild man, for the San Francisco Examiner is authority for the story, and the Examiner never lies at least it does not always admit that it is lying. And, anyway, people are hard to please who insists upon an affidavit with each story that appears in the Sunday supplements of the yellow journals. Our own citizens, who visit the Canyon this summer, should not fail to take along a camera for protection against the wild man. But here is the story:

Many strange stories have been told of the “wild man” Of the Grand Canyon of the Colorado, and while some persons have credited these weird tales, they have for the most part been regarded as the ingenious inventions of imaginative travelers, and have passed into tradition as such. But according to, I. W. Stevens of Cedar, CO, the “wild man” is not a myth, and he gives a thrilling account of an encounter he had with the creature.

“Two years ago,” says Mr. Stevens.”I had business in the northwestern part of Arizona that took me in the neighborhood of the extreme lower end of the Grand Canyon of the Colorado River, in Mohave county, Arizona. Having the misfortune of getting my arm broken. I took a trip to the river to the river to kill time and catch a few beaver. I constructed a skiff, with the aid of a friend, and, when my arm got strong enough, I took a’ trip up the Canyon as far as I could go with a boat. Few miles above the entrance hauled my boat upon the sand and got ready to examine the rock walls.

“The first thing that attracted my attention was the imprint of bare feet in the sand Thinking the tracks had been made by some Indian, perhaps a Piute or a Hualapai, I began looking the gorge over with much interest. Going down stream a short distance I found more tracks.

“The third day of my stay I saw the head of a man on a bench of rocks on the north side of the river. Evidently he was seated on the edge of a cliff some distance above my camp. I rowed upstream a little above the point where I saw the man’s head and part of his shoulders above the greasewood brush. Climbing up to the bench I had some difficulty in finding a place that I could get over the ledge and be on a level with my strange neighbor.

“I finally succeeded in approaching closer to the point. I saw sitting on a large boulder a man with long white hair and matted, that reached to his knees. The creature was unaware of my approach, and I gazed up on him for some moments unobserved. He was about fifty yards away and in full view. He wore no clothing, and upon his talon-like fingers were claws at least two inches long. A coat of gray hair nearly covered his body,
with here and there a spot of dirty skin showing. I had found the ‘wild man of the rocks!

“At that moment a rock loosened o some animal came rolling down. The creature turned his face toward me. Horrors! What a face – it was seared and burned brown by the sun, with fiery green eyes. With a wild whoop and a leap he was up over rocks and cliffs like a mountain sheep for about seventy-five yards. Then he stopped. He was armed with a queer shaped club, large enough to fell an ox. Brandishing this bludgeon, he shrieked and chattered for a moment, then started towards me, roaring and still flourishing his weapon. Faster and faster he came and my hair began to
stiffen.

“I am a poor runner, so I stood my ground. When the creature was within about fifteen yeard of me I raised my rifle to fire, thinking to cripple him. As I glanced along the barrel I heard a growl just above the wild man. He also had heard the growl and braced himself for the shock.

“I drew a hasty bead on the cougar and pressed the trigger. When the smoke had cleared away the mother cougar lay dead where the wild man
stood. The man himself had disappeared. The two young cougars were
still on the rock, apparently greatly frightened by the report and echoes of my old Sharp’s rifle.

“Reaching hastily for a cartridge, I found I had neglected to buckle on my belt when leaving camp, so I hastily retreated to the boat, where I round
everything as I had left it. I shoved the boat off and drifted toward camp, which was near the cougars. There lay the old cougar where she had fallen. The wild man was standing over the two cubs, which’ also were dead, he having beat the life out of them with a club. He stood a moment gazing on the carcasses, then got down on hands and knees and drank the warm blood
as it flowed from the death wounds. The sight sickened me.
“I stood up in the boat and yelled. The man sprang to his feet, took a long look at me, and then fled up from ledge to ledge until he reached the fourth ledge, where he stopped. Here he flourished his club again and screamed the wildest, most unearthly screech I ever heard then turned and sprang up the craggy wall of the canyon.

“Not fancying my wild neighbor, I packed my outfit into the boat and drifted down and out of the canyon before I made camp for the night. That
was the strangest adventure of my life.

“Tradition records that years ago hostile Indians captured three men, bound them to logs far up the canyon and cast them adrift upon the swollen
river. It may be that this wild creature is one of those unfortunate men
who, by chance, freed himself and escaped death, but was made insane by
his awful experience.”