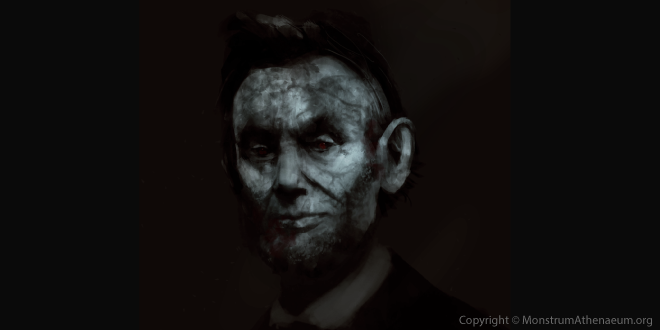 Abraham “Honest Abe” Lincoln was the president of the United States from 1861 until he was assassinated in 1865 by John Wilkes Booth. The assassination happened in the Ford Theater in Washington D.C. while Lincoln was with his wife, Mary Todd Lincoln; watching a play for some much needed relaxation as the American Civil War was drawing to a close. The popular story paints John Wilkes Booth as a Confederate sympathizer who was part of a larger conspiracy to assassinate the top members of the Union Government in order to allow the Confederacy to survive but is it the whole truth? What if instead of assassin and murder his true title was John Wilkes Booth, zombie hunter?

There have been long standing rumors of what actually happened that April evening in 1865 and the events that led up to Lincoln’s assassination. Some have said that John Wilkes Booth was actually a hero for shooting Lincoln; claiming he saved the millions of future lives with his actions. Now, this could be summed up as “Confederacy sympathizing”, but that would be the easy way to explain it. A darker possibility exists among the shadowy corners of the southern plantations from which the Confederate Army made its ill-fated attempt to divide the nation. It wasn’t just that the ways of old, such as slavery, were on the line if they lost the war. It was far more personal for the men fighting for the southern states, as they felt they were fighting for their children’s very future existence.

What if Abraham Lincoln was carrying a deadly disease which could threaten the lives of the entire nation? A rare disease with a process largely unknown to those people who secretly expressed their fears of is spreading; as they didn’t exactly have a name for it at that time. However, in recent times we have given the disease Lincoln was carrying a name – the zombie plague.

Since we all know the popular story of his assassination, lets discuss the unpopular. Rumors hint that Lincoln was secretly suffering from a rare and unknown virus which he contracted on an outing during his presidency. It was not of his own doing, as he had fallen victim to the disease while in Gettysburg making his historical address to the nation. This is where John Wilkes Booth comes in on the assassination. Booth had met Lincoln briefly and had noticed something strange about him, according to rumors. Booth had said that Lincoln had an odd smell about him, as if he was dying. It was waved off as Confederate sympathizing babble, but Booth was being literal.

Fast forward to April 14, 1865. The night of the assassination was no mere coincidence, as Lincoln knew of nefarious plot to assassinate the top government officials, of whom he had become unintentionally entangled in a web of dark conspiracy. For the survival of the nation, Lincoln secretly met with Booth and laid the whole plan out; giving him the information on times and locations of the people to be shot. He also revealed what Booth had already suspected, that he himself had become a victim of circumstance. The two men came to an agreement on what must be done next.

The agreement Abraham Lincoln made with John Wilkes Booth also came with a humble request made by Lincoln unto Booth. Lincoln didn’t want a dark stain of conspiracy placed on the history of the United States. So to avoid that issue, Booth reluctantly agreed to carry the secret Lincoln entrusted him with to the grave. However, this is where Booth, now the hero, failed to keep his word. He had to have said something to someone after his meeting with Lincoln for this story to have gotten out. Perhaps Booth felt it necessary to document Lincoln’s illness in case he was unsuccessful and the plague spread.

A picture would have John Wilkes Booth painted as a sniveling coward hiding in the shadows; waiting for the right time to strike and snuff out Abraham Lincoln’s life. But is this really what the infamous assassin of the president was like? The real John Wilkes Booth was an actor and yes, a Confederate sympathizer. However, he was a man who believed in a cause. Historically speaking, since the victors get to right the history, that cause was not the correct one to believe in. With the rumors of a zombie plague being started by the Union Government, which Lincoln had fallen victim to inadvertently, it kind of makes you stop and think for a minute. What would you have done in the same situation?

John Wilkes Booth was set into motion on a secret mission by the president and he carried out his part of that mission to the letter. Unfortunately for him, in trying to keep his word to Lincoln he has been painted as one of the most cowardly and vile characters in United States history. Fortunately for us, the United States was spared from the zombie plague…at least until we bring it upon ourselves.

Could these rumors be the actual facts of what happened at the end of the Civil War? Or are they just whispers in the blowing wind? There is a conspiracy theory, a plot to do evil, and a sinister plan lurking in the shadows of every corner of this planet, throughout our history. Could a zombie virus actually have been started, and a plan implemented by the government as far back as the Civil War? It sort of makes you want to question whether the history books are anywhere close to the ballpark of truth when rumors like these come to light.

Abraham “Honest Abe” Lincoln was the president of the United States from 1861 until he was assassinated in 1865 by John Wilkes Booth. The assassination happened in the Ford Theater in Washington D.C. while Lincoln was with his wife, Mary Todd Lincoln; watching a play for some much needed relaxation as the American Civil War was drawing to a close. The popular story paints John Wilkes Booth as a Confederate sympathizer who was part of a larger conspiracy to assassinate the top members of the Union Government in order to allow the Confederacy to survive but is it the whole…
Was Abraham Lincoln Killed By a Reluctant Zombie Hunter?
Was Abraham Lincoln Killed By a Reluctant Zombie Hunter?
Argus

Previous Zombie Apocalypse Quiz: Which Weapons Would Suck During A Zombie Attack?
Next An American Werewolf In … America – The Beast Of Bray Road